Menzgold Customers Want Gov’t To Come Out With Road Map To Settle Loses Or Else... 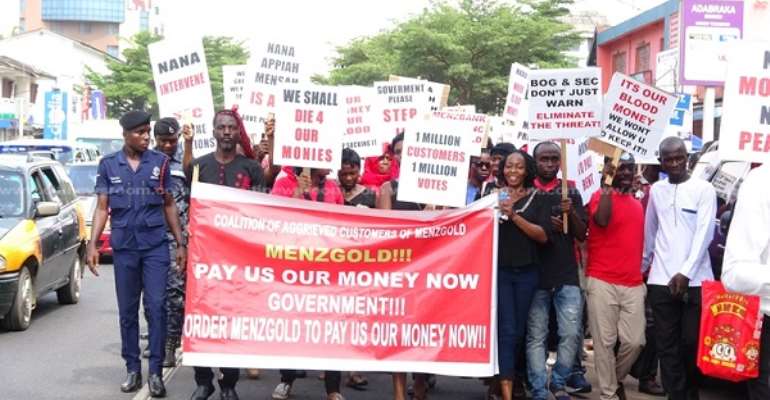 Aggrieved customers of gold dealership firm, Menzgold Ghana Limited are calling on the government to come out with a clear road map on how they are going to compensate them.

They said failure to do so will warrant another series of demonstrations in the country.

The customers whose monies have been locked up with the embattled gold dealership firm following its closure in the latter part of 2018 have been left clueless about whether the government has plans to retrieve their investments for them or not.

Whiles Finance Minister, Ken Ofori has made it clear that government is not going to step in to pay their locked up funds to them, the customers say they are still looking up to the government to outline the plans they have to help them get their monies back.

In view of that, they issued a statement last week declaring their intention of embarking on a series of demonstrations if the government does not give them any road map soon before April 2.

Speaking in an interview on Class FM on Friday, March 29, 2019, Public Relations Officer (PRO) of the aggrieved Menzgold customers, Frederick Forson assured that they are not looking to cause any trouble. All they are asking for is for the government to fill them in on the plans they have for them.

“Even if on the first day we get a favorable response from the government or from the state access as we stated in our letter, then we will cool off. All that we want is a response. Even now that the communique is out there if the government comes out and tell us that these are the road maps am sure we will call it off.

“All that we want to know is the concrete and believable road map for us to know what is happening because all that we know is that we have heard there have been seizures, this institution is doing this, but we do not have any official communication from to know that yes customers of Menzgold this is how the state is taking your matter or these are the timelines. We want to have some timelines so that all of us will be able to check those timelines and we hold on to them”, Frederick Forson intimated.