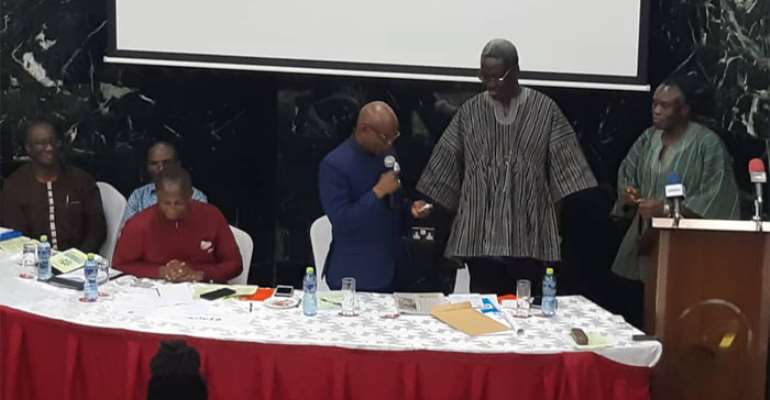 About 790 officers of the Land Use and Spatial Planning Authority (LUSPA) of the Civil Service have been transferred to the Local Government Service.

The officers are expected to support the respective MMDAs to effectively perform their spatial planning and human settlement functions as conferred on them by several statutes.

The personnel from the Physical Planning Department of LUSPA, comprise a total of 110 professional planners, 430 technical officers, and 103 auxiliary staff spread across the regions and districts of Ghana.

Speaking at the handing over ceremony of the staff on Friday, March 29, 2019, in Accra, Executive Officer of LUSPA, Lawrence Dakurah, observed that “the inequitable and haphazard development of our human settlements in Ghana, be they cities, town or villages, has been a matter of concern globally and to Ghana in particular, and concerted efforts are being made to address the situation.”

According to him, over the past decade, the government of Ghana initiated reforms in the land use and spatial planning system under the Land Administration Project (LAP).

He noted that the reforms have yielded the desired impact, adding that the transfer of the staff was in furtherance of the institutional successes that have been chalked during these reforms.

Head of the Local Government Service, Ign. Dr. Nana Ato Arthur, in a statement, observed that the Physical Planning Department has a strong and direct impact on development issues such as agricultural modernization, revenue generation, sanitation, disaster risk reduction, transportation, climate change adaptation, housing, among others.

According to him, “this therefore implies that the sustainability and resilience of MMDAs will largely depend on the integration of development policies and spatial dimension in the design of national, regional and district level interventions with all stakeholders onboard.”

He noted that to ensure the achievement of the above, indicators relating to the establishment and the integration of physical Planning Department and all other departments will be included in the Performance contracts for regional coordinating councils and MMDAs.

He added that “there will be continues sensitization on the Inter-Service and Sectoral Collaboration and Cooperation System (ISCCS) and the monitoring of integration of the departments.