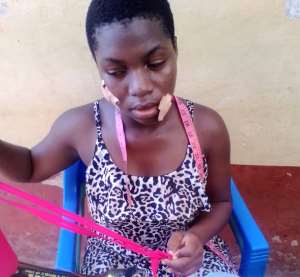 The Ho Central Police has commenced a manhunt for a suspected robber who attacked and robbed, Houndjoe Kayi, a student of Mawuko Girls Senior High School earlier this week.

Houndjoe Kayi, a 17- year old student of the EP Mawuko Girls Senior High School in Ho, was attacked in the night of Wednesday, 20th March, when she was returning home from an evening class.

The victim, a final year student, went for evening studies at the Power College campus -RTC, few meters away from the Ho Market branch of Ghana Commercial Bank.

According to the victim, few minutes after walking past some boys at a kenkey joint, she was held from the back by the neck of her dress, by an unknown person, a situation that got her frightened.

Upon turning quickly around, the assailant -who was later identified only as Kofi by the kenkey seller, with a knife in his hand, demanded money from her but just as she was about to scream, the assailant laughed off, told her he was just playing and let off her dress.

"When I was returning from the class, I walked past some boys at the kenkey seller's place. Few meters away from the Commercial Bank, somebody held the neck of my dress from the back. I got scared and turned quickly to look at the person. Then I saw him holding a knife up on me. He asked me for money and I got more scared and wanted to scream. Then he laughed off, left off my dress and told me he was just joking", she said.

Houndjoe in a frightened mood, walked on, since the assailant had gone back to the kenkey joint, but was attacked again when she was almost at home.

"When he left me, I walked on and he was also returning back to the junction -the kenkey joint. But suddenly, he held me again, when I was almost home, just behind our house." He demanded for money again, and I told him I had no money. This time around, I screamed and he stabbed me on both sides of my cheek."

Houndjoe's mother, who heard the panic cry of the daughter rushed out only to meet her with a blood-stained dress.

She told Awake News' Abdul Iddrisu Faisel that, "When I heard the scream, I didn't know it was that of my daughter but I was alarmed and had to run out."

"I got to the back of the house and saw the guy running away, with my daughter in a blood-stained check. By that time, some neighbors have also run out to her but the guy had long gone".

Kofi, who according to the narrative, is an ex-convict, lives with some relatives in the same vicinity with the victim.

He succeeded in snatching the young girl's school bag but had to abandon it when the people, run out upon hearing the cry of the victim.

Houndjoe was treated at the Volta regional hospital, Trafalgar, that night and has since been visiting the facility for regular wound dressing.

The Ho Central police unit has confirmed the incident and has assured that they are searching for the assailant, who has since gone into hiding.