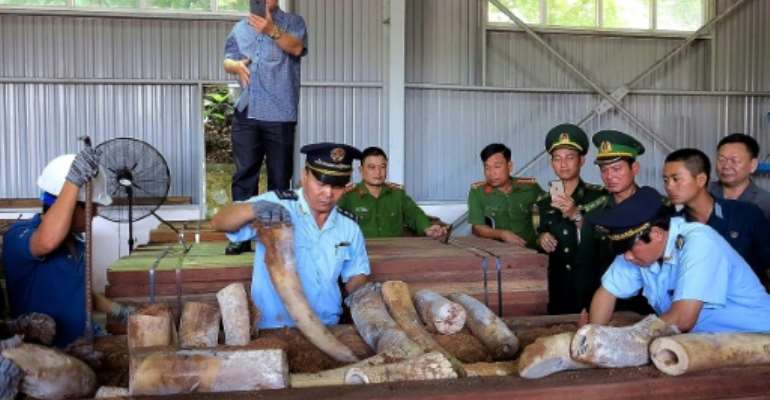 Vietnamese customs officials inspect a huge haul of suspected ivory seized from a timber shipment from the Republic of Congo. By - (Vietnam News Agency/AFP)

Vietnam has seized more than nine tonnes of suspected ivory in a timber shipment from the Republic of Congo, customs officials said Friday, in one of the country's largest illegal wildlife hauls in years.

Though it is illegal to buy and sell ivory in communist Vietnam, lax law enforcement has allowed the illicit trade to flourish on the black market.

The government has vowed to crack down on illegal wildlife trade in the face of mounting international pressure and authorities said the latest bust in central Danang city was the biggest in years.

"A huge 9.1-tonne (20,000-pound) package of goods suspected to be ivory hidden inside timber logs was found and confiscated," according to Hai Quan news site, the official mouthpiece of Vietnam Customs.

The ivory-stuffed timber logs were discovered Tuesday at Danang's main port on a ship from the Republic of Congo in central Africa, it added.

A customs official told AFP "authorities are still inspecting before making a final conclusion" about the substance.

Images on state media showed piles of alleged tusks being weighed by officers in a warehouse after the seizure.

Ivory is used for jewellery, decorative housewares and traditional medicine in Vietnam, which is also a popular transit hub for illegal wildlife destined for elsewhere in Asia, mainly China.

The government has struggled to crack down on the illicit trade as sales have moved online from traditional marketplaces.

Britain's Prince William was in Vietnam in 2016 to host a wildlife conference where he delivered an urgent plea to end trafficking to save critically endangered species.