Nana Addo, How Great Do You Want To Be Recognized After Kwame Nkrumah? 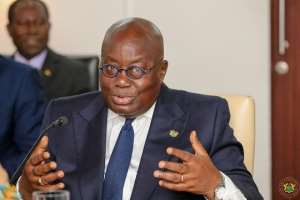 Nana Akufo Addo, African countries, including Ghana, are facing serious economic problems which need immediate attention to avoid future disaster. Africa is not poor, yet remains the poorest continent in the world.

This can be avoided but it has been permitted and accepted by African leaders because they are too lazy and corrupt to compete with a white man to develop the continent.

Europeans or Americans are human beings like Africans but they have reached far leaving Africa behind. They built their country through hard work, always trying to achieve what no one has ever done before. This is the reason we often hear: The first white man to do this and that. You tried to do something; unfortunately, you imitated an African leader who has already built a Cathedral.

Nana Addo, I believe there is a lot you can do for Ghana, which will benefit the entire African continent, to print your name solidly in the political history of Ghana, as one of the greatest African leaders after Kwame Nkrumah, if you do what no African leader has done or what an African leader tried and failed.

The United Nations fears that the mass expulsion of Congolese refugees from Angola could trigger a humanitarian crisis. There are more than half a million, in addition to those who have already left the country because they are identified as irregular migrants by the Angolan government.

The dream of finding salvation by migrating to the Angolan bank of the Congo River, protected by the UN's Refugee Agency, seems to have vanished and the European lesson on migration control finds followers also in southern Africa.

Angola, a former Portuguese colony, has a territory rich in diamonds, oil, gold and copper, great agricultural potential of fertile lands still untilled, more than 95% and a National Bank without heavy neo-colonial ties.

According to data from the Monetary Fund, it has a GDP per capita of 4.342 dollars. In turn, the Republic of the Congo torn by corruption and civil war, it is a former French colony, with a GDP per capita of 1,831 dollars, less than half of its neighbors, despite being equally rich in oil, gold, phosphates, and diamonds, but with an economy exclusively neo-colonial.

They are not among the poorest on the continent, as the per capita GDP of various African states does not exceed a thousand dollars a year. But the divergence of their trajectories seems evident, if 40 years ago the Congolese per capita GDP exceeded the Angolan one, 1.304 dollars against 669 dollars.

Nana Addo, Africa is not poor, but rich, yet little remains to Africa of its wealth. However, if African countries have undoubted benefits from foreign investments, they should be able to regulate these financial flows through laws that they do not have today.

On the contrary, foreign powers are allowed to legally raid much of what they get from the continent, through tax havens. According to an investigation by Al Jazeera, the so-called illicit financial flows, exceed 6%of the GDP of the entire continent, three times more than Africa receives in aid.

Not to mention the 30 billion dollars that these companies repatriate: all profits made in Africa but promptly transferred to the parent company, managed by European, American and, recently, to Eastern financial centers.

That’s not the end but every year, about 29 billion dollars is taken from Africa, through logging, hunting, and illegal fishing and the damage that society and the African economy bear due to the fight against climate change amount to 36 billion.

Africans can’t use fossil fuels to grow as it has been done historically in Europe. Africa is not responsible for the climate crisis but the continent is the one paying heavily at the expense of Europe, America or more than all the others.

Western governments and the US government pose as generous benefactors and do their utmost to "help those who would not be able to help themselves." Hypocrisy often propagated by the media.

It would be better if they stopped perpetuating the damage they are doing, forcing African governments to open their economy to privatization and their markets to unfair competition and do not transfer to Africa the sovereign impulses that are being imposed in Europe and in the USA.

Nana Akufo Addo, leading African leaders to solve these problems ruining our economy and running our resources dry will make you one of Africa’s greatest leaders, but not a Cathedral. With the fast rate of Africa’s population growth, it will be a catastrophe if the continent might face a serious threat of famine in the future.

We have been writing about this daily, yet African leaders are not paying any attention. It is not every time musicians will gather around and record "We Are the World" to save Africa. African leaders are disgracing black people, this must come to an end.

Nana Addo, please, lead the way, and let other African leaders follow you because this is what will make you a great leader.