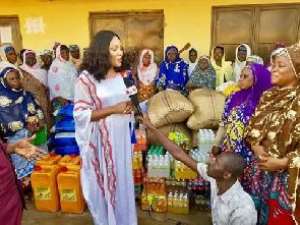 Information available to the Voiceless Media can confirm that Mrs. Felicia Tettey, the 2nd Vice Chairperson of the New Patriotic Party (NPP) in Northern Region, will contest for the party’s Parliamentary Primaries in the Sagnarigu Constituency when nominations are opened.

According to Mrs. Tettey, contesting for the position of a Vice Chairperson of the party and serving in that position has given her the understanding of party mobilization and organization which she will bring to bear on the chances of the NPP in the Sagnarigu constituency.

"I am a professional fundraiser and will, therefore, be able to raise the necessary funds and logistics needed to execute a competitive campaign and elections in the constituency", she said.

Mrs. Tettey used the occasion to appeal directly to the delegates of the Sagnarigu constituency to give her their mandate when the time comes.

She has also been supportive of the activities of the party in the Constituency and Region and it is hoped that when elected as the Parliamentary Candidate of the NPP for the Sagnarigu Constituency, she will be able to effect a credible campaign in the constituency.

Some of the Constituency Executives who the VOICELESS MEDIA spoke with were very pleased of her intention to contest the Primaries in the Sagnarigu constituency and pledge to give her their fullest support to take over from Alhaji A.B.A. Fuseini who they say was performing well in speaking proverbs than bringing development to the constituency.