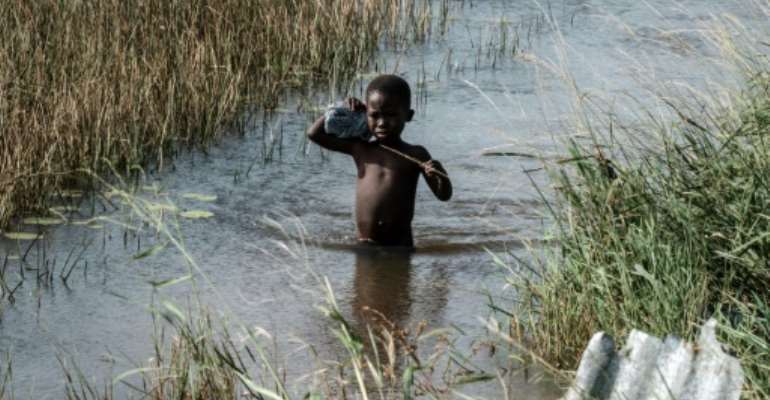 Experts have warned that the destruction of drinking water sources and lack of sanitation in overcrowded shelters in Mozambique could create breeding grounds for waterborne diseases such as cholera. By Yasuyoshi CHIBA (AFP/File)

Mozambique was Thursday scaling up efforts to fight a cholera outbreak, creating nine centres and preparing a vaccination drive after the first five cases were confirmed in the cyclone-ravaged country.

A government health official said Wednesday that five cases of cholera had been confirmed following the cyclone that killed at least 468 people and affected 1.85 million.

World Health Organization official David Wightwick told reporters in Beira that nine cholera treatment centres were being set up around the central Sofala province, which bore the brunt of the cyclone that struck two weeks ago.

Experts have warned that the destruction of drinking water sources and lack of sanitation in overcrowded shelters in Mozambique could create breeding grounds for waterborne diseases such as cholera.

Government plans to roll out a mass vaccination campaign next Wednesday to stem the spread of the disease, which thrives in conditions of poor hygiene and causes acute diarrhoea that can be fatal if untreated.

"There is a vaccination campaign which will start next week," Wightwick said as the country awaits delivery of 900,000 doses of vaccines.

The vaccinations will protect the tens of thousands of survivors for three months.

"It buys us some time and it means we will probably have to do a further vaccination," he said.

"The first objective is to control the outbreak," he said, warning though that "there are other places that remain cut off".

A cholera prevention publicity campaign has also been launched with messages conveyed on radio and using loudhailers across affected towns and villages.

Cyclone Idai smashed into Mozambique nearly two weeks ago, unleashing hurricane-force winds and heavy rains that flooded much of the centre of the poor southern African country and then battered eastern Zimbabwe and Malawi.

UNICEF warned that there is "very little time to prevent the spread of opportunistic diseases".

It warned in a statement that current conditions of "stagnant waters, lack of hygiene, decomposing bodies (and) overcrowding in temporary shelters" could lead to outbreaks of diarrhoea, malaria and cholera, "to which children are especially vulnerable".

"The lives of millions of children and families are on the line, and we urgently need to mount a rapid and effective humanitarian response," said UNICEF chief Henrietta Fore as she launched a $122 million (108 million euro) appeal for the three affected neighbouring countries.

"The massive scale of the devastation wrought by Cyclone Idai is becoming clearer by the day," she said.