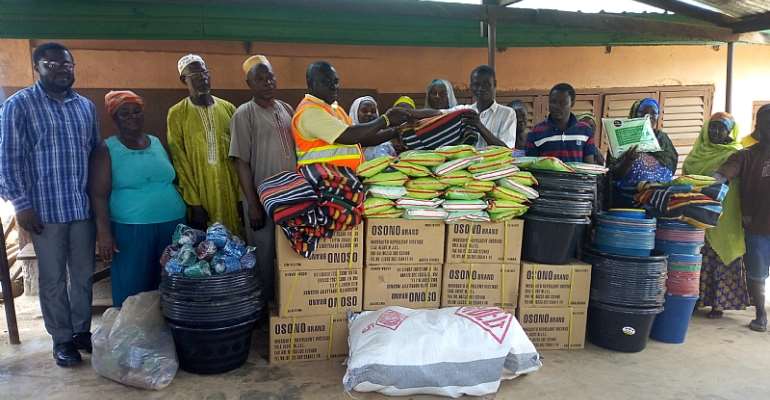 Some 70 victims from PWD-Camp, a suburb of Akyem Oda in the Eastern region have received assorted relief items from the National Disaster Management Organization (NADMO).

Presenting the items to the victims, the Birim Central Municipal Director of NADMO, Mr. David Okyere disclosed that the items were to help mitigate the immediate sufferings of the victims.

He indicated that although the items might not be enough to satisfy the needs of the victims, they were the best efforts NADMO could do to solicit more support from government and other willing philanthropists.

According to him the victims were individuals who suffered from a devastating rainstorm somewhere in July last year as well as from other rainstorms, this year.

He explained that it took that long time to make the presentation because the NADMO office in the Municipality had not received relief items for the past two years and added that this made it impossible for the directorate to respond effectively to victims of disasters.

Mr. Okyere warned the victims against sale of the relief items, noting that, such an act would amount to a total waste of government’s efforts in supporting them during this critical time in their lives.

The Administrator of the directorate, Mr. Jones Adeti on his part advised residents to maintained conscious and seek for building permits from the Municipal Assembly before putting up structures.

He cautions the public against dumping of refuse into drains and building on waterways as that could be a contributing factor to flooding.

Mr. Adeti disclosed that the Regional and Municipal NADMO team in addition to the Urban Roads Department of the Assembly have submitted a report on drainage mapping of Apetesu, Ahonfra, Kasawere and Bonkore drains in the area for their aggregation, adding that very soon a proposal would be forwarded to international partners and central government to desilt these drains.

On behalf of the recipients, the Assemblyman for the area Mr. Iddrisu Abudulai Alhassan commended the Assembly and NADMO for the support.

He said the gesture would go a long way to alleviate their plight and pledged to take precautionary measures to forestall future occurrences of such disasters.