We Check Members Background Before Accepting Them —Okada Operator 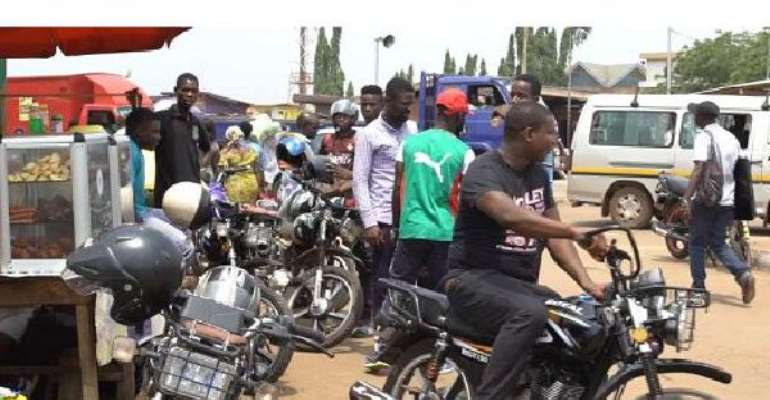 In 2012, the use of motorbikes for commercial transport in the country was outlawed under Section 128 (1) of the Road Traffic Regulations, 2012 which states that, "the licensing authority shall not register a motorcycle to carry a fare-paying passenger(s) except for courier and delivery services. Offenders are liable to fine or imprisonment."

Jesslord Ben Etse, an okada operator in Dansoman a suburb of Accra speaking to Bernard Avle on CitiTV's current affair's show 'The point of View, ' on wednesday evening indicated that they perform some informal checks on new members who want to join and operate at the okada stations.

He said this is help to avoid miscreants infiltrating their businesses and putting the name of motor riders into disrepute.

The Okada operator told host of the show that when he was asked what they do to differentiate between commercial riders and armed robbers/thieves who also operate with motor bikes.

"Our operation is not backed by law, we know. So, we do not have an association or union however we have stations where we operate from and before anyone could join, we perform our own checks before allowing them to operate in the stations,"he started.

Supt. Dr Samuel Sasu Mensah from the MTTD noted that there's a need for stakeholder consultation on the Okada ban.

He added that they need to set up special schools to train the riders to ensure they comply with the law.

Ben Avle intimated that the Okada operators will comply and cooperate if they are regulated because it is their means of livelihood.

"We are extremely prepared to go through training if it will get the Okada business legalised," says Jesslord.