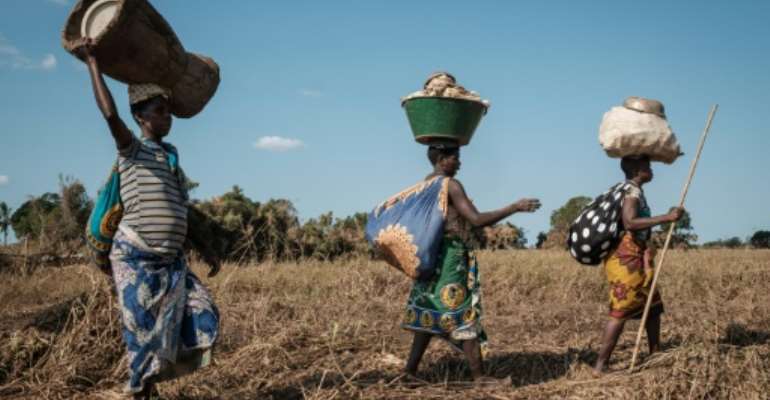 Evacuated women walked to a shelter after collecting maize on the ground which was under flooded water because of Cyclone Idai. By Yasuyoshi CHIBA (AFP)

Twelve people perched precariously on a branch of a mango tree, sheltering from the floodwaters of tropical Cyclone Idai which wrought devastation across southern Africa.

"But after two days, it snapped," said Isabel Bernard, 20, a survivor of the storm's aftermath who had been clinging to the tree branch along with her son.

"We were thrown into the water and I lost sight of my son. I looked everywhere but I didn't know where he was -- I was terrified."

Still exhausted by the trauma she suffered, the young mother struggled to recount the situation that unfolded earlier this month when the river Buzi burst its banks and she was forced to flee her home.

Caught completely off-guard, she sought refuge in the tree with her three-year-old son Zacharia, a seven-year-old nephew and eight-year-old niece, along with others.

They were trapped there without food or water as floodwaters rushed underneath them, carrying human bodies and animal carcasses.

The branch buckled, and the group were swept away.

When she scrambled free, she was covered with the dark red earth dislodged by the fast-flowing floodwaters.

She hoisted herself into another tree, now without her son.

"I spent three days in that tree, the time it took for the water to recede," the survivor said.

"I didn't have my son and I didn't know what to do. It was horrible, I was totally powerless," she murmured.

She was finally able to climb down from the tree and take stock of the dire situation unfolding around her.

She held out hope that her son had survived their terrifying ordeal but a small body had been found in a nearby cornfield -- that of Zacharia.

He will be buried where he was found.

"Of the 12 people who were perched on the branch, seven died" by drowning, the young mother said. 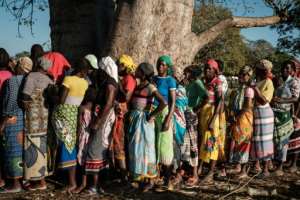 Nearly two weeks after the initial drama, vegetation still hangs from the tree's branches at a height of almost four metres (14 feet), according to witnesses -- testament to the scale of the flooding.

Though the road sign that welcomes drivers to the village of Begaja survived the deluge, the village itself was almost completely destroyed.

"The school is the only undamaged building because it was made of concrete. There were also a couple of stone houses and the little church which were spared."

Electricity pylons are scattered on the ground and only a handful of wooden construction posts remain in the ground after homes and businesses were levelled.

Up to 15 villagers in the community of around 1,000 located 90 kilometres (55 miles) west of Beira perished in the flooding. 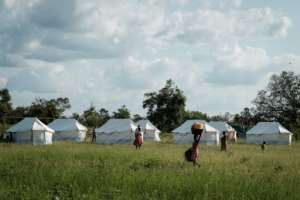 Bernard, like 200 others whose lives were devastated by the cyclone, is sheltering in a thatched-roof church.

Also among them is Maracame Mandava who recounted how he survived by sheltering on the school's roof while his mother fell to the same fate as Zacharia.

"She clung to a tree, but she was old. After two days without eating she was fatigued and fell into the water," Mandava said.

"We found her body in a field several kilometres away a few days later."

After her traumatic experience, Bernard ruled out returning to her village. "I worry that it will happen again," she said.