New DR Congo Leader To Visit As US Sees Progress 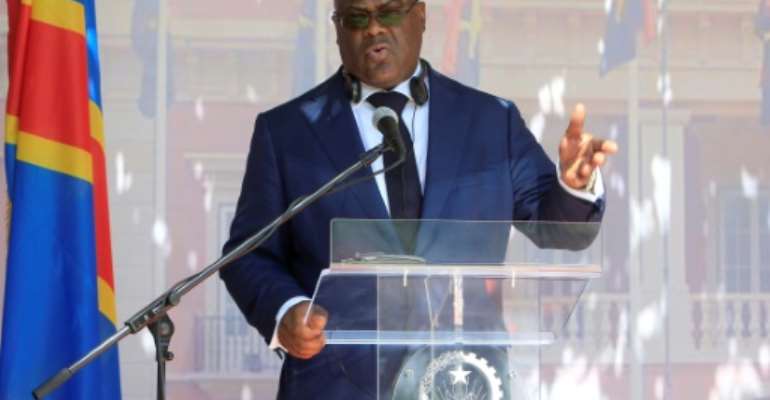 President of Democratic Republic of the Congo Felix Tshisekedi, seen here in February 2019, will visit Washington as the United States voices hope for progress in key areas under his tenure. By STRINGER (AFP/File)

The new leader of the Democratic Republic of Congo will visit Washington next week as the United States seeks a fresh start in working with the country to combat ills including corruption, the State Department said Tuesday.

President Felix Tshisekedi will visit Washington from April 3-5 in the first official trip by a leader of the vast, resource-rich nation to the United States in five years.

The State Department said Tshisekedi would meet Secretary of State Mike Pompeo but did not announce a summit with President Donald Trump, who under ordinary protocol would receive a visiting head of state.

"We share President Tshisekedi's interest in developing a strong partnership between the United States and the Democratic Republic of the Congo," State Department spokesman Robert Palladino told reporters.

"We're committed to working with him to advance his agenda to combat corruption, strengthen the rule of law, enhance security, protect human rights and promote economic growth through increased foreign investments and trade," he said.

Tshisekedi was declared the victor of delayed December 30 elections, marking the first peaceful transfer of power in sub-Saharan Africa's most vast country since independence from Belgium in 1960.

The election was nonetheless marred by allegations of widespread fraud, with rival Martin Fayulu saying the election was stolen. But international powers rallied behind Tshisekedi after a court confirmed his victory in hopes of preserving stability.

In early actions seen favorably in the West, Tshisekedi has blocked newly elected senators from taking office over corruption and has moved to repair long-turbulent relations with Rwanda.

Despite supporting Tshisekedi, the United States has imposed sanctions on key players in the vote including the election chief and the country's top judge on charges of undermining democracy.