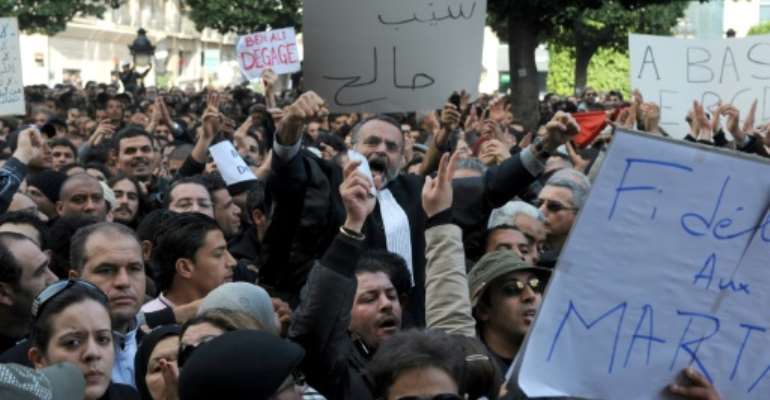 Set up three years after the 2011 uprising that ousted dictator Zine El Abidine Ben Ali (pictured), the Truth and Dignity Commission was created to probe human rights violations an dmake recommendations for Tunisia on its path to democracy. By Fethi Belaid (AFP/File)

A tribunal tasked with healing the wounds of dictatorship in Tunisia called for institutional reforms and an official apology from the head of state, in its final report published Tuesday.

Set up three years after the 2011 uprising that ousted dictator Zine El Abidine Ben Ali, the Truth and Dignity Commission (IVD) was created to probe human rights violations and make recommendations for Tunisia on its path to democracy.

The IVD's report calls for reforms "to dismantle a system of corruption, repression and dictatorship" within state institutions.

It also proposes measures to boost the independence of magistrates and administrative courts, as well as legal protection for victims and witnesses in corruption cases.

Tunisia's security forces should be restructured to increase transparency and prevent their use for political ends, an independent body set up to oversee the police and an intelligence service which answers directly to the president and under parliamentary supervision, according to the report.

The panel calls for President Beji Caid Essebsi, as "a symbol of the state", to make an official apology to all the victims of human rights violations at the hands of the state since 1955, a year before independence from France.

The apology would be addressed to all the victims in a presidential speech delivered at a venue to be renamed after the event.

The IVD proposed that its archives on violations, based on tens of thousands of interviews it carried out and cases studied, be opened "to preserve the national memory for future generations".

Amnesty International hailed the publication of the report as "a watershed moment for Tunisia".