Under Declaration And Payment Of Revenue Impedes Revenue Target 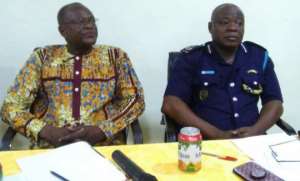 According to him, many VAT registered taxpayers still did not issue VAT invoice for goods and services which denied government the resources needed to develop and improve the lives of the citizenry.

“To address this, we are conducting frequent audits and also doing test purchasing. Those found to be flouting the law will be sanctioned appropriately,” he declared.

Another issue which Mr. Pwawari mentioned was the low rate of filing of returns to the STO in spite of the continuous public education on the subject.

“Let me remind our cherished taxpayers through you to ensure that they file their 2018 annual tax returns not later than 30th April, to avoid sanctions,” he said.

The Bolgatanga STO manager was speaking at a media engagement in Bolgatanga in the Upper East Region ahead of the periodic public education on tax compliance and the timely filing of returns.

The office and its allied agencies have been sensitizing the public to purchase only goods with the excise tax stamp and also for traders and wholesalers to stock and sell only stamped items.

However, some items that have not been stamped were still being displayed and sold to the public.

Mr. Pwawari condemned the situation and promised to go after recalcitrant traders, importers, manufacturers and wholesalers in the Upper East Region, especially in Bawku, Navrongo and Bolgatanga.

“Even though most excisable goods in the region have the stamp affixed on them, some traders are yet to fully comply. It would be recalled that in February this year, a special taskforce from our outfit seized some drinks which did not have the tax stamp in Bolgatanga, Navrongo and Bawku. Similar exercises will be carried out periodically and to avoid losing their goods, traders are advised to ensure that they do not deal in any excisable that does not have the Tax Stamp,” Mr. Pwawari noted.

He expressed excitement at the deployment of some NABCO interns to the Bolgatanga STO, saying they would be assigned to cover other areas to help widen the tax net, while ensuring that majority of residents in the region paid their taxes.