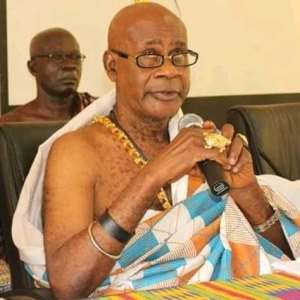 The former Ghana Cocoa Marketing Board Chartered Accountant after imposing sequence alleged death rumour has finally gone to rest at 82.

Daasebre Awuah Kotoko II was installed a chief for Begoro, Fanteakwa and the commander of Akyem Abuakwa left wing since 1985 until his demise on March 19, 2019, of which he ruled for thirty-four (34) years.

As the Benkumhene of Akyem Abuakwa traditional council, he took charge of over 300 communities forming the Benkum division of the kingdom. Daasebre Awuah Kotoko II was a man of peace and a developments oriented person who always championed educational achievements amongst the youth.

His leadership and intellectual acumen made him known at the national level when he was appointed a Council of State member by H.E Flt.Lt.Jerry John Rawlings, a former President of the Republic of Ghana.

Daasebre Awuah Kotoko II was born to Opanin Daniel George Amfo and Royal Yaa Atua Amfo on December 9, 1936. Daasebre aged 82 years and ascertained a private name of Edward Agyarko Amfo before his installment as a chief.

Modernghana.com will keep updating it cherish readers on any other related information about the death of Daasebre Awuah Kotoko II.