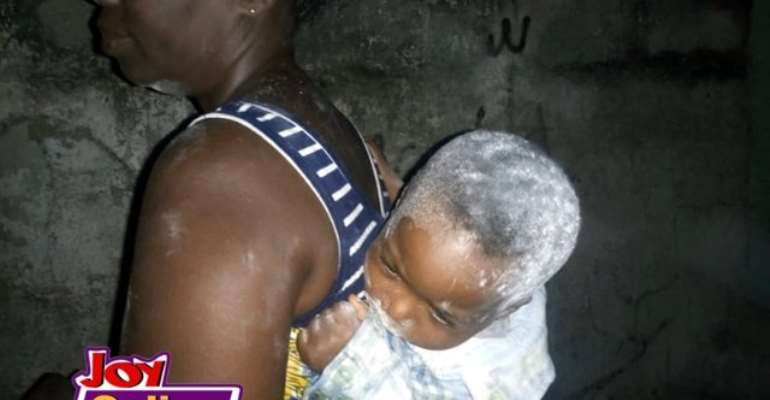 Little Francis was covered in white powder, a sign of victory in Ghana

Narrating how little Francis was stolen, Nana Akosua revealed that the woman approached her later to ask if her kids were Ewes and she answered in the affirmative, the suspect continued to ask the names of the kids.

She explained that the suspect told her she is also called Mawusi after she learnt the name of young Francis.

The mother of two said the suspect requested to buy a pastry and sausage for her kids.

Although she agreed, Nana Akosua was apprehensive because of the recent kidnappings in the region so she followed the suspect at a close distance keeping an eye on her kids.

However, she returned to her spot when she saw the suspect turn in her direction bringing back her children. She began panicking when she realised it has been an hour but her baby was still not back.

She then saw her first child coming back around the corner crying wondering where the suspect was and what might have happened.

That was the last she saw of her baby boy.

Nana Akosua has spent her every day since Friday at church, praying for the return of her son.

The Redeem Christian church became her second home, as she hopes and prays for a miraculous return of her one-year-old “Ceeceeboy” (as she affectionately calls him).

On Tuesday dawn, the family of the missing boy placed a call to Ina-Thalia about the good news.

Police are expected to brief the media on how they found the missing boy later Tuesday.