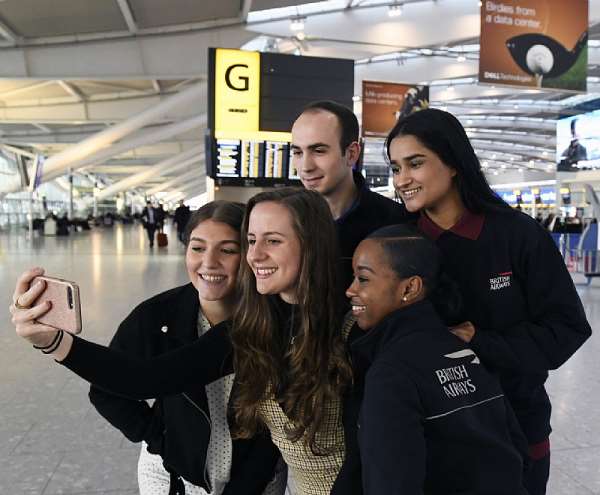 After introducing the largest Cabin Crew Apprenticeship programme in the UK, British Airways has announced plans to employ around 2,000 cabin crew this year.

The uniqueness about the apprenticeship programme is that it is actually opened to young dreamers desirous of a cabin crew whether with a college certificate or not. Apprenticeships are open to applicants of all ages starting from 16 years old, with 5 GCSEs A*-C or equivalent, including English and Maths at grade A*-C (cabin crew apprentices must be 18 or over).

As part of the new year-long scheme, apprentices complete an intensive training course and then continue their training in the air and on the ground, with continuous support from a certified apprenticeship coach.

This was disclosed to a team of Ghanaian journalists from who were on a tour of the airlines world-class Global Learning Academy and terminal three facility at the Heathrow airport in the United Kingdom.

As the airline celebrates 100 years of flying, more than 100 places are now available on one of the airline’s seven apprenticeship programmes.

From Head Office and Customer Service roles to opportunities in Engineering and Operations, there is a scheme to suit all skills and ambitions.

She noted that their apprentices have the unique opportunity to learn from the very best industry experts while undertaking practical training in a real-world environment.

“I would encourage anyone, at any age, to apply for one of our apprenticeships in 2019, as we celebrate our centenary and look ahead to the next 100 years of flying. There really has never been a better time to join British Airways,” she intimated.

For more information, and to apply, candidates should visit www.careers.ba.com

Take NPP’s money but don’t vote for them – Naana Jane to Asi...
34 minutes ago