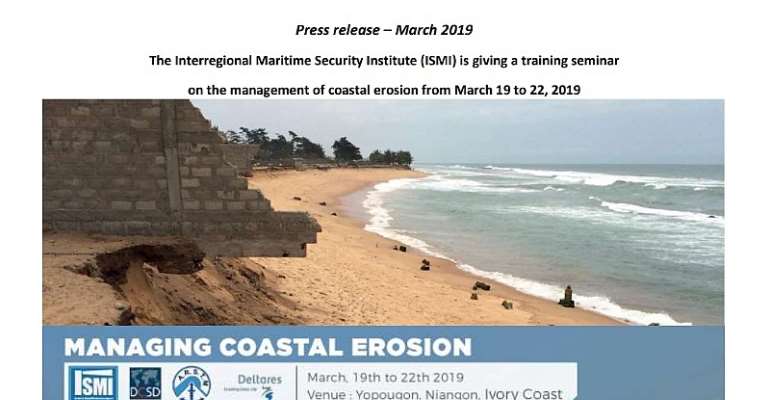 The Coordinator of Côte d'Ivoire's National Coastal Environment Management Program, Prof. Eric Djagoua is calling on countries of the Gulf of Guinea to work towards a common goal to deal with coastal erosion.

He noted that discussions on management of the coastal environment reveal that the West African coastal zones are badly affected hence the need for various actors to work in synergies.

Speaking at the opening ceremony of the seminar organized by the Interregional Institute for Maritime Security (ISMI) seeks to empower high-level auditors, policy-makers, politicians and researchers to combat the coastal erosion from 19th to 22nd March, 2019 at Yapougon, Niangon in Ivory Coast.

Prof. Djagoua said the seminar will deepen the collaboration between both experts and non-experts in the field in line with the West African Coast Observation Mission (WACOM) which plays an important role in building strong ties.

He advised participants to share knowledge on protection strategies to make the coastal areas resilient from the many environmental challenges and climate change.

Prof. Djagoua acknowledges that efforts are being made by governments with the support of donors, particularly the World Bank, through the West African Coastal Areas Management Program (WACA) to help address the menace.

The Regional Coordinator of the Action of the State of the Sea, Mr. Guillaume de Beauregard, gave statistics to support the reasons that led French Cooperation, through ISMI, to opt for the theme on littoral erosion.

He said about 70percent of West African inhabitants live on the coast, and that more than half of the region's GDP comes from coastal areas.

According to him, statistics show that the coastlines are eroding as much as 10 meters per year in some areas, forcing local populations to relocate or displaced leading to the development of activities linked to maritime insecurity, including illegal fishing, piracy and banditry.

"As ISMI's aim is to promote a safe, secure, clean and sustainable maritime space in the Gulf of Guinea, it was therefore urgent to address this subject, both for environmental and maritime safety reasons," Guillaume de Beauregard emphasised.

He added that beyond the academic effort, the seminar also aims to allow fruitful exchanges between participants in order to create a common platform for discussion and cooperation.

Prof. Djagoua indicated that the search for sustainable solutions adapted to the West African context is also one of ISMI's main objectives.

The Director General of the Regional Academy of Marine Sciences and Technology (ARSTM), Karim Coulibaly, drew the participants' attention to the fact that erosion is a serious global threat that has been lingering on for decades.

He posited that coastal erosion is one of the main obstacles to the sustainable management of sea-related wealth, whether economic, environmental or cultural.

Karim Coulibaly stressed that Côte d'Ivoire, a country with the continuous and steady retreat of the coastline of some localities, resulting in the disappearance of villages and infrastructure particularly the administrative buildings and cemeteries were previously located near the shore.

Col Karim Coulibaly honored by the support and presence of the high-level participants promises to work even harder.

"Your support inspires and motivates us to continue to make ISMI an interregional reference institute in the field of training, a dynamic and credible institute that will enable the States of the Gulf of Guinea to have the technical know-how necessary to promote a safe, secure, clean and sustainable maritime space for their economic and human development," he concluded.

Komenda factory: "Mahama constructed the roof before buildin...
2 minutes ago