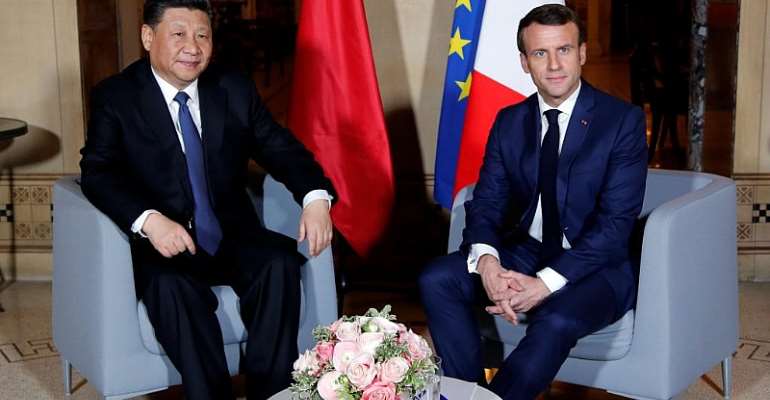 The French President Emmanuel Macron is hosting his Chinese counterpart Xi Jinping in Paris this Monday, where deals on nuclear power and aerospace are among 30 contracts expected to be signed.

Macron greeted Xi at Paris's Arc de Triomphe war monument, ahead of talks and a state dinner at the Elysée Palace.

Macron will be looking to take a firm line with China – after Italy defied warnings from the rest of Europe and joined Beijing's massive Belt and Road infrastructure project intended to link Asia to Europe.

Macron has said Europe needs a joint approach to relations with China – and one that should be respected by individual countries.

Search to find common goals
His view is shared by the German Chancellor, Angela Merkel, who will join Macron and Xi for talks on Tuesday with EU Commission chief Jean-Claude Juncker. It's hoped Europe and China can explore areas of shared interest ahead of a summit in Brussels next month.

Warnings that Chinese investment is buying Beijing too much influence in Europe are misguided, says Martin Jacques, author of When China Rules the World – who sees China as the key to Europe's prosperity.

“Europe's in trouble. It's hardly growing and it needs to embrace the growing parts of the world – starting with China,” Jacques says. “There's no question that Europe as a whole, and in this context western Europe, has to look to a new kind of relationship with China.

“Just as the rise of the United States shifted Europe's attention westwards, the rise of China now must command the attention of Europe eastwards – and at the moment Europe doesn't know what it's doing.”

In a letter published in Le Figaro, Xi urged more trade and investment between France and China. The EU is already China's biggest trading partner, and during talks this week Macron is expected to push for increased market access to China.

Marketplace concerns
Many in Europe worry about unfair competition from Chinese companies that benefit from government backing.

Among those voicing concern is German Foreign Minister Heiko Maas. "In a world with giants like China, Russia or our partners in the United States, we can only survive if we are united as the EU," Maas told local media. "And if some countries believe that they can do clever business with the Chinese, then they will be surprised when they wake up and find themselves dependent."

Watching China rise to become the most powerful economy in the world isn't a reason for worry for Jacques, who says the backing of Chinese companies by the Beijing government points to a difference of culture, and not a desire to create an unfair marketplace.

“We've got to learn that China is different, and we can't just insist on it operating on Western/European terms. China has different roots and a different history. Its remarkable transformation has been a product of an economic policy called 'Reform and Opening Up', which has involved a very competitive market combined with the very important involvement of government.

"This is not just a product of the era since 1949. This is historically a very powerful feature of China over 2,000 years.

“We've got to see the future in a different way. I don't mean we shouldn't stand up for European interests in our relationship with China, but Europe needs to wake up to the realities.”