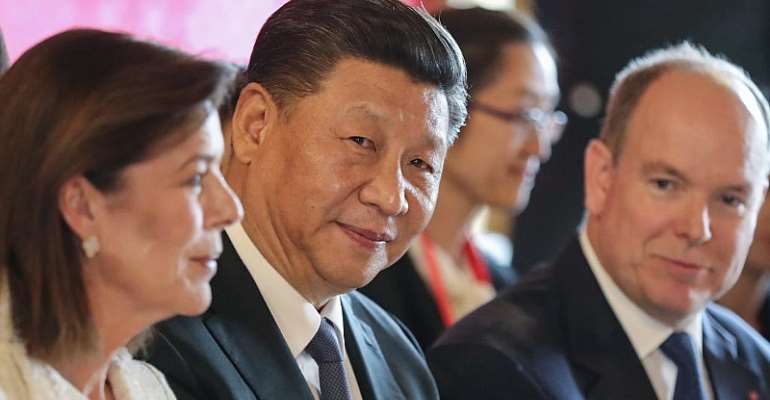 Chinese President Xi Jinping arrived in the French Riviera on Sunday for the final leg of his European tour, as his French counterpart, Emmanuel Macron, looks to forge a united continental front to contend with China's growing global ambitions.

Xi's trip began in the principality of Monaco before face-to-face talks with Macron.

Monaco has signed a deal with the Chinese tech company Huawei to develop its 5G telecommunications network.

Europe is broadly distrustful of Huawei, which is poised to become the dominant player in next-generation telecom networks worldwide.

Lucrative deals in the offing
After dinner in Nice on Sunday evening, the Xi and Macron travel to Paris on Monday for the official state visit, marking 55 years since Charles de Gaulle broke ranks with the West to establish diplomatic relations with the Communist nation.

A series of cooperation deals on nuclear power, aerospace and clean energy initiatives, some involving lucrative contracts, are expected to be signed.

Standing up to Xi
The European Union is China's biggest trading partner but Xi's visit poses a challenge for Macron as he wants to deepen EU ties with China while pushing back against Beijing's growing influence.

"We have a lot to do together in terms of climate action, in terms of multilateralism, but we also have to defend our own interests," Macron said in Brussels on Thursday.

He has lauded the EU's awakening to the challenges posed by China, which the bloc now labels a rival despite becoming Europe's biggest trading partner.

Changing attitudes
When Macron visited China in January 2018 he spoke of a strategic partnership and he said that China could be a great partner for France.

“But his position towards Asia in general has evolved considerably,” China specialist Valérie Niquet told RFI.

“Now he backs the Indo-Pacific concept which China sees as a way of containing Chinese power in Asia. So I think in receiving Xi Jinping on this very short visit there will be a willingness to push forward the need for reciprocity.”

A silk road that goes in both directions
On Tuesday, Macron and Xi will be joined by the German Chancellor Angela Merkel and EU Commission president Jean-Claude Juncker to explore points of convergence ahead of an EU-China summit in Brussels next month.

Xi arrived in France from Italy, which has angered its EU partners by formally joining China's "new Silk Road" - officially known as the Belt and Road initiative - for a series of maritime, rail and road connections aiming at expanding Chinese trade.

“By inviting Merkel and Juncker, Macron is showing Xi that China can't just deal with EU countries one by one, but that there's a bloc,” François Godemont, author of “La Chine a nos portes” (China at our door) told French public radio.

Macron is expected to press his call for increased reciprocity regarding market access to China, in particular Beijing's demands that foreign companies hand over vital technological know-how in order to invest in the country.

"If we're going to talk about a new Silk Road, then it must be one that goes in both directions," Finance Minister Jean-Yves Le Drian told BFM television on Friday.