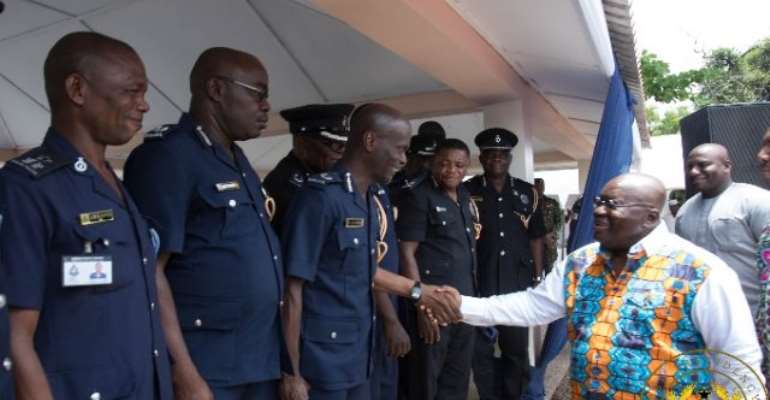 President Nana Akufo-Addo has assured the Ghana Police Service that the era where an officer stays without being promoted for more than the mandatory four years shall be a thing of the past.

He said that a police officer with an unblemished record who is due for promotion will be duly promoted.

Addressing the end of year social activities of the police at the annual WASSA ceremony in Accra Friday, he stated that promotions in the police service will be devoid of political and other considerations.

He also disclosed that government has begun the construction of a National Detective Training Academy in the Ahafo region to beef up police investigative services in the country.

The Academy according to President Nana Akufo-Addo will provide the police with requisite skills to tackle the emerging crimes in the country.

“Indiscipline, lawlessness, kidnappings, murders, assault by and against police officers, vigilantism amongst others are threatening the rule of law. My government will continue to work to modernize and resource the police service adequately in order to assist it to maintain law and order, protect lives and property,” he said.

President Nana Akufo-Addo stated that government is determined to work with the police to guarantee the security of its citizens in accordance with the rule of law.

The new Academy in Kenyasi Number One in the Ahafo region will rival its American equivalent with its FBI training academy, he added.

“Government is determined to give whatever support is required to ensure that we have the service Ghanaians deserve,” President Nana Akufo-Addo said.

He urged the officers to work hard to maintains the peace the country is enjoying stating, “the most important thing for our nation are its peace, the safety of its people and its territorial integrity.”

The President added the construction of 320 housing units for officers in the National Police Training Academy is ongoing while 4000 police officers are being recruited into the service with 2000 already under training.

In addition, three helicopters are being procured to facilitate police operations with some selected police officers set to be trained as pilots.