‘Galamsey At Banso? …. But Banso Is Supposed To Be A Hallowed Place?’ 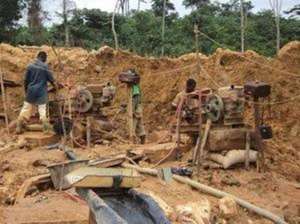 “This is So-and-So. She comes from your area!”

I began to take an interest:

“Where exactly in my area?”

“Not many people know it!” I said. “I myself only heard it as a small child. Rumours filled our town – this was 1943 — that “The King has gone to Banso!” We were warned to be wary of strangers!”

“No;” I added, “Akyem Abuakwa people don't play with Banso at all.”

“Ho – who told you that? Go to Banso today and see. Galamsey has ruined the place completely!”

“But the place is supposed to be hallowed ground! “

“Maybe it was hallowed ground some time ago. But not any more.”

“I tell you Banso has been ruined by galamsey. You can go there yourself and see.”

I kept quiet. I was sadder than I am willing to admit. I had to admit that the Ghana I knew and loved as a child has vanished entirely. People entrusted with traditional duties that had been scrupulously observed for centuries, do not care about their duties any longer. If you ask them, they will probably retort that in the olden days, they received certain privileges associated with their offices but these days, those privileges no longer find their way to them. And you cannot do anything in Ghana without money”.

“But their fathers wouldn't have left their duty undone just because certain other things had not been done? Anyway, digging up hallowed sites to search for gold is far worse than leaving certain duties undone!”

“You may say that, but suppose the traditional duty actually entailed not allowing anyone to go near the hallowed sites, let alone do galamsey there?”

“You're taking theory! If you wanted to keep the place(s) entirely safe, your best bet would be to wall the place(s) up or fence them and employ strong men to keep a 24-hour watch over them!”

”And that would cost money?”

“A lot of money!… Remember also that some of the people who are supposed to keep these grounds safe and hallowed are themselves victims of galamseyers”

“I mean many are forced to buy “pure water” (sachet water) and take it with them to their farms, because all the rivers and streams on the way to their farms have been destroyed by the galamseyers! And they need to drink water whilst working on their farms! If an elemental necessity like water is eluding them, from where are they going to get the consciousness that will impel them to keep traditional grounds sacred?”

“Hmmm, it's a pity that the modern state of Akyem Abuakwa has not managed to keep Banso and its environs safe as revered historical and cultural relics, because history teaches us that when they left Adanse around the 17th century, Banso was their second capital (the first was Akrokyere (usually misspelt as Akrokerri). About 17 Akyem Abuakwa Kings reigned at Banso, before the Abuakwa capital was moved to Kyebi. So when the Akyems say the Okyenhene has “gone to Banso”, they mean he has gone to his “village” or his ancestral home.”And anyone who understands traditional language will get the coded message contained in that statement.”

“Ao! And the galamsey people are destroying this important locality?”

“Destroying? They have DESTROYED IT! Even if the rivers and streams are reclaimed, Banso will never be the same again. You see, traditional hallowed grounds of that nature contain more than physical objects, such as houses, huts, trees and sheds. They contain a certain spirit or aura. It's like going to Rome or Paris or London – yes the physical objects are attractive but it's the idea that this is where Julius Caesar was assassinated, or where the guillotine stood or where Winston Churchill made his famous wartime broadcasts that people are thrilled by.”

“Well, our people don't seem to be anxious even to stay alive and enable their offspring to stay alive by getting good water to drink, how much more preserving hallowed grounds?”

“It doesn't bear thinking about. Right now, thousands of people are dying in Mozambique and Zimbabwe because a cyclone has brought terrible flooding to their towns and villages and polluted all their drinking water. Food and water are being flown to them by helicopter or sent by boat. Man has been contributing to these disasters by engaging in activities that produce carbon dioxide and shoots it far up into the sky, where it produces “global warming”. We – rather fortunately – are yet to feel the full impact of global warming, although our bush fires of the early 1980s and the drought that made some of the turbines at the Akosombo Dam inoperable, were an early warning of what could happen.”

“We've been fortunate so far, and yet we are deliberately destroying the water sources that global warming hasn't yet touched!?”

“Yes! Do you know what our forefathers would tell us if they could come back and see what we are doing to ourselves?”

“They would just look us up and down and tell us: 'Nkwasea to!'

“Wow! Utter, irredeemable FOOLS! And that, in truth, is what we indisputably are!?”

"You Were Not A Vice President When MoMo Was Introduced 11ye...
10 minutes ago