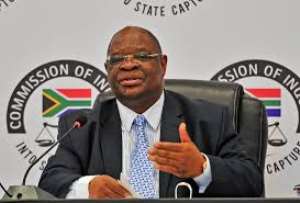 Today I will share my thoughts on the structural composition and historical design of the international system in order to locate the realities that could potentially undermine Radical Economic Transformation (or RET, the policy position of the African National Congress (ANC)), and even the seven pillars of the Economic Freedom Fighters (EFF).

It will also be necessary to juxtapose the agitation for a narrow “state capture” investigation against the international value system, which is inherently corrupt and lopsided in favor of deepening inequalities within countries as well as between developed countries and other parts of the world, with Africa as an area of focus.

It is interesting to observe how much the South African society is so entrapped in party politics, the belief that one party is better than the other based on its policy proposals or election manifesto.

My view is that South Africa and our continent are not equipped, or at worst ready, for the game of party politics as it is played out in Europe and North America. Thus, elections are a waste of time and resources.

Above all, politics in Africa is an exclusive terrain of elites who are much more concerned about their self-preservation and nothing else. Politics in its very nature is about how to manage the affairs of society, at individual, family, village, town, provincial and national levels. One might also include international affairs, because of the urgent need for collective responsibility in dealing with matters of the world.

African politics is the one that only plays out in capitals of countries, pretending to be concerned with national matters. It is also dominated by same individuals who have been there since independence, directly and indirectly. They continously change suits and costumes using a platform called a political party to have uninhibited access to resources, and to act on behalf of brutal external forces.

Many people view political parties in Africa as synonymous with corruption and manipulation. There is a reason for this perception, whether justifiable or not. The work of nation building is much more complex than just simply voting individuals in and out power. Efforts to forge nationhood should deal with value systems, conduct, ethics, and a strong ‘social contract’.

The origins of an African state lacked these basics: meaning that labour reserve camps (politics) and sources of abundant resources (economics) established to support European states and global capitalism were simply converted to states without any sense of ‘nationhood’. In fact nations were submerged into imperial frameworks to create colonies and protectorates. At the heart of this, colonial masters only wanted to make their countries in Europe powerful by having eternal control of “their” territories abroad.

There is therefore no evidence to suggest that post-colonial Africa has moved beyond this reality, in spite of all rhetorics and nice political slogans. Africa is still a playground of European powers to this day. Freedom fighters and so-called post-colonial leadership have not shown strong intent to serve divorce papers on former colonial masters: to say enough is enough! In fact, they have preferred to maintain the status quo through not only language and political/social/economic systems but also through a myriad of issues that go beyond normal conception by ordinary people.

Can someone explain disgusting political labels that our countries still carry to this date: Anglophone, Francophone, Lusophone, and Arabic? Why on earth are South Africa, Kenya, Nigeria and Zimbabwe part of the Commonwealth? Why is our continent divided into Sub-Saharan and uber-Saharan? Imagine Togo, Benin, Cote d’Ivoire or Senegal having no relations with France. Angola and Mozambique rejecting Lisbon’s influence over their territories.

European languages like French, English, Portuguese and Spanish as well as Arabic are not just official languages in our countries but they are working languages of the African Union (AU). The AU is actually an aggregation of the resolutions taken in the Berlin Conference of 1884-85.

The picture I have just painted aims to demonstrate that what we call “countries” are mere fiefdoms that serve the meta-structure, and are used to loot and protect interests of those who sat around the table in Berlin over a century ago and their heirs. Locals, in the form of politicians and educated elites, perform the role of agents at a fee or rents. That makes our countries ‘rentier’ states or economies.

The rents that our states receive through our leaders and elites may be deﬁned broadly as “the income derived from the gift of nature“; and are usually understood to be income accrued from the export of natural resources, especially minerals, oil and gas. Other income comes in the form of foreign direct investment (taxes and royalties), loans from global DFIs and donor funds.

Structurally, African countries are essentially an integral part of what I refer to as the ‘global corruption value chain‘, an essential component of the international capitalist system. Political independence without liberty to decide (i) what is good for one’s country and people as well as (ii) no authority whatsoever over the country’s wealth and resources is worse than having no independence at all.

The international value system favours inequalities, corruption and abuse as well as sustenance of poverty. For example, how is it possible that Coca-Cola makes more money than all African countries combined? How come Aliko Dangote (Nigeria), Carlos Slim (Mexico) and Anton Rupert (South Africa) have more wealth than almost the entire populations of their respective countries? And, why Sandton has more resources than neighbors Alexandra?

Obviously, anyone reading this would think what is my problem because all these people and entities earned their money “cleanly” and their operations were “overboard”. That is exactly the criticism of global capitalism, it simply advances illogical arguments, and fails to provide answers to the obvious questions.

The World Food Programme says, “The poor are hungry and their hunger traps them in poverty.” Hunger is the number one cause of death in the world, killing more than HIV/AIDS, malaria, and tuberculosis combined. Oxfam’s estimated in 2016 that the richest 1% had more wealth than the rest of the world’s population combined.

Do we still think we live in a normal just, world? It is quite noteworthy to now focus a bit on the state capture investigation recently announced by South Africa’s president Jacob Zuma.

President Zuma and the Office of the Public Protector want an extended inquiry that will investigate all “areas of corruption and culprit”. Thus, their argument should be accepted without any condition because there is probably a genuine case to free South Africa from the chains of the unfair structural composition and historical design of the international system. The Union of South Africa established in 1910 still exists to this day, blacks are excluded and the territory continues to be an extension of Europe in more ways than one.

South Africa, for example, is the world’s number one producer of platinum and other key minerals. Yet the country derives little or no economic power from its unique position because it has to supply them as raw materials to the developed North at a huge discount. At worst, land where minerals are extracted belongs to European descendants and or multinational corporations, and global miners “own” all minerals under the guise of foreign direct investment. All this unfairness is underpinned by a system which does not recognize our country’s legitimate authority over its land, resources and people.

Although Britain has no minerals to speak of, it hosts the London Bullion Market Association (LBMA) as an illustration. LBMA world gold market makers are UBS, Deutsche Bank, Barclay’s, HSBC, etc. None of these entities are from Peru, South Africa and other major gold producing countries. Moreover, the commodities market is a strange one, buyers determine and fix the price and it is a situation of take it or leave it for our countries.

This deep corruption undermines sovereignty of many countries in Africa and beyond. However, our states have adopted policies and systems that support the global corruption value chain, and we call them a “sound [economic] policies”. As American author Naomi Klein rightly said this made post-apartheid South Africa a “democracy born in chains” – negotiations in the early 1990s pushed the ANC in a new kind of web, “one made of arcane rules and regulations, all designed to confine and constrain the power of elected leaders.” Hopes of the black majority to see justice were thwarted. Land and economic control were never taken over as the settlers retained their ill-gotten gains.

Now the question is: Wouldn’t it make sense to untangle this web to finally free the country from the international and local corruption? The Gupta family must indeed appear before the commission, there is no doubt about that. But to argue that they must be the only ones to face the music for “capturing the state” is extremely shortsighted and extremely dangerous. Exterminating the Gupta influence over the state does not go quite far enough to claim any victory. Once we can decide on our land, minerals and other natural resources, economy, etc., we would be free and truly post-colonial in character and substance.

However, beneficiaries from the unfair system and a choir of black liberals (those who suddenly embrace global liberal agenda) don’t want the investigation to uncover truths about the extent of stranglehold over our country and its economy by capital and individuals (agents of global corruption) at the expense of the citizens. Also former Public Protector Advocate Thuli Madonsela also tries to overplay her hand. She insists that the probe must be narrowed to focus on the amount of only R 00 Million prepaid payment made to Tegeta by Eskom and ignore the unreasonably lucrative, evergreen contracts awarded to the likes of Exxarro, AngloAmerican and South32. No logic at all.

Some people still believe that “freedom” means the right to hold on to their ill-gotten gains, and political hegemony. Afriforum and a string of “foundations” want to protect white supremacy in South Africa at all cost, so they are aware what Zuma’s intentions are with the state capture inquiry.

Forensic Financial Auditor Jeff Koorbanally appeals to the President that “this investigation needs to be the mother of all State Capture and should not be exclusive.” Eskom, Telkom, SAA and beyond state companies should be included in the corruption investigation. And the institutions responsible for fiscal and monetary policies must not be spared, all the way to commercial banks and the securities exchange. As many witnesses as possible, irrespective of location in the world, must be summoned by Zondo to help to finally destroy the colonial character of the South African state.

Without playing politics of political parties, the black majority should be standing behind Zuma and Justice Raymond Zondo in untangling the mystery of state capture in South Africa as a way of taking the country out of the control of “invisible forces” who continue to drain our economy billions of dollars each year. We need to change our country to reflect what we always fought for since white man’s incursion over 500 years ago.

South Africa needs to escape the rentier state status and over-dependence on providers of dirty money for survival. The mere fact that Lonmin or Steinhoff provide jobs does not mean that they support and understand our agitation for economic freedom.

Global sharks are ready to sink South Africa to frustrate radical economic transformation, land reform and intentions of changing the country’s economic design. A broad investigation into state capture is a necessary precondition to radical change in the economy. They will start with a court challenge to force the government to only investigate the Gupta family as if they are the only ones who capture states, next they would want to turn South Africa into Zimbabwe or Venezuela.