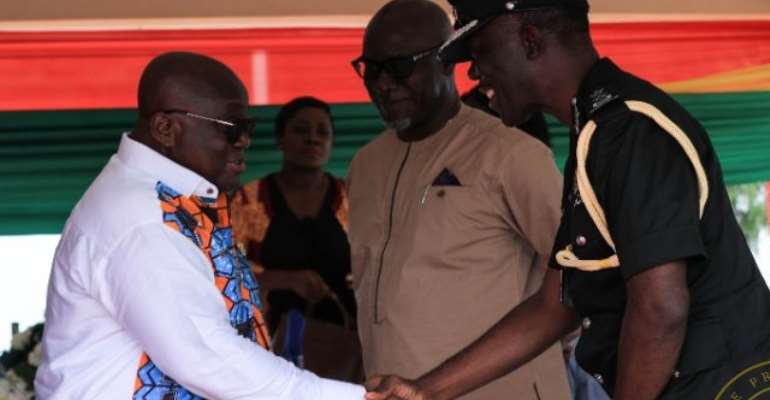 AKufo-Addo with COP Dampare at this year's WASSA

President Akufo-Addo reiterated his commitment to ending the worrying and unacceptable phenomenon of vigilantism in the country’s body politic that roared it ugly head.

“...I have tasked the Attorney General to prepare and submit to Parliament, as soon as possible, specific legislation to deal with this phenomenon of vigilantism, and provide appropriate sanctions against its occurrence.

“I am asking for the full support of the Police Service in the passage of the law, and in its enforcement. We owe it to Ghanaians and to generations yet unborn to maintain the peace and stability of our nation, which our generation enjoys.”

The President said this at the end-of-year WASSA of the Ghana Police Service, on Friday at the Police Headquarters.

“As I indicated in my Message on the State of the Nation to Parliament, I am determined to end acts of political party vigilantism. I have said so on several occasions, and I will repeat it again. Crime is crime, it has no political colour, and the police should act against any person or group of persons engaged in unlawful acts,” he added.

Describing the peace, the safety of people, and the territorial integrity as the most important things for a nation, President Akufo-Addo noted that the issue of law and order is particularly germane in the country, at a time when indiscipline, lawlessness, kidnappings, murders, assault by and against police officers, vigilantism, amongst others, are threatening the rule of law.

Government, the President added, is determined to work with the Police Service to guarantee the security of citizens in accordance with the rule of law and assured that whatever support is required to ensure that the country has a Police Service that the people of Ghana deserve will be done.

“And to that end, we are, amongst others, constructing a new National Detective Training Academy in Kenyasi No.1, in the Ahafo Region; and we have promoted 1,502 senior police officers and 18,853 junior officers, since I took office in 2017, with over 2,230 in the first quarter of 2019, a development which has been described as unprecedented by the IGP,” President Akufo-Addo said.

He continued, “The construction of 320 housing units for officers at the National Police Training Academy is ongoing, and 4,000 police officers are being recruited into the Service, with 2,000 already under training.

Government has, so far, supplied 320 vehicles to the Police Service, with 273 soon to be delivered. In addition, three helicopters are being procured to facilitate Police operations, with some selected Police Officers set to be trained as pilots.”

Touching on the image of the Police Service, President Akufo-Addo commended the police for arresting the ‘trotro’ driver and his ‘mate’ who assaulted a police officer, Constable Julius Mawuli Ekpe, on the Mallam-Kasoa road in Accra.

“In and around the same time, some police officers were also seen assaulting two journalists, Malik Sulemana and Raissa Sambou. I am happy that the IGP has moved quickly to interdict the police officers, who were responsible for the assault, ordering immediate investigations into the matter,” he added.

President Akufo-Addo noted that “it is important for the growth and development of the society that justice is done to all manner of persons without fear or favour, affection or ill-will. It is in everybody’s interest that the Police Service retains the neutrality and professionalism guaranteed under the Constitution.”