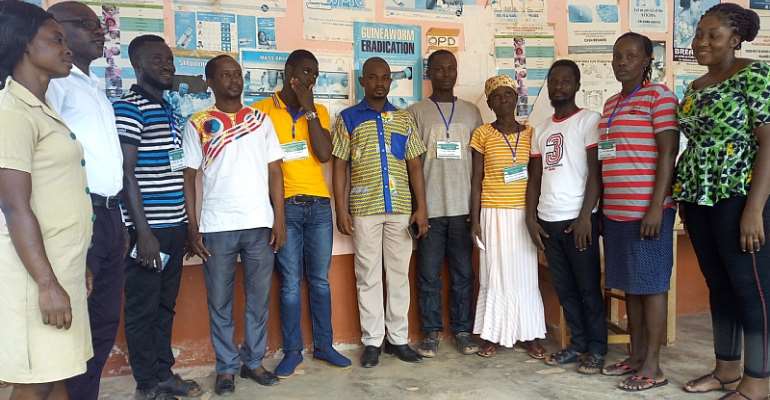 The Birim Central Municipal Health Directorate has embarked on Community engagement research to screen and detect Tuberculosis (TB) cases, at the community level.

The move was to minimized the incidence of TB and improve case detection and treatment in the Municipality.

The on-going exercise which employs the services of community-based health volunteers highlights the suffering that TB continues to exert on people despite the fact that effective control measures are available worldwide, and mobilizes political and social commitment for further progress.

Speaking at a monitoring meeting with volunteers at Gyadem, a farming community in the Municipality, the Municipal Health Director, Mr. James Atampiiga Avoka, commended the volunteers for reaching the target audience and identifying the disease with the necessary logistics provide.

According to him, the successes chalked up so far at the Gyadem and Essam CHPS zones where the research implementation was being piloted were as a result of the increased efforts of field volunteers and health officials towards a reduction of TB cases in the Municipality.

He told the volunteers that, his outfit was committed in resourcing them to easily get to the hard-to-reach areas to identify the disease and control its spread in the Municipality.

Mr. Atampiiga Avoka, stated that, the exercise forms part of the Directorate’s activities marking the 2019 World TB Day, which falls annually on March 24, under the global them: “It’s Time”, to encourage all Ghanaian to maintain the momentum to eliminate the disease by 2030.

He advised persons with symptoms including feverishness, excessive sweating at night and prolonged cough with blood stained sputum, to desist from self-medication, but rather report immediately to the nearest health facility for screening and treatment.

The TB Control Co-ordinator of the Health Directorate, Mr. Ebenezer Siaw noted that, TB prevention and management is a complex situation and requires a multifaceted approach with range of community stakeholders and organizations that have a role in improving detection of cases.

He indicated that the TB case detection rate in the Municipality in 2018 was 51 per cent below the 90 per cent target and 33.7 per cent below the World Health Organization’s (WHOs) target above 70 per cent smear positive cases. “The Directorate was expected to detect 140 TB cases but we had 72 in 2018 which is woefully inadequate”, he said.

Mr. Siaw announced that, available statistics from the implementation exercise so far indicates that, out of the 634 persons creened in Gyadem, one person was detected positive pending further investigation while one person was also tested positive in Essam out of the 80 persons that were screened by the volunteers.

According to him, the Ghana Health Services (GHS) still has a huge burden of difficulty in detecting TB cases and said recent studies showed that there were some individuals with the disease who did not show any symptoms.

He revealed that, there were also emerging trends of drug resistant TB which was worrisome, but was quick to add that an on-going study to establish the magnitude of that problem is underway.

He encouraged healthcare providers to strive to improve upon their current treatment success rate of 85 per cent, saying “we are not proud of the deaths occurring among TB patients because these are preventable causes of deaths”.

Mr. Siaw, therefore advised the public to observe good hygiene practices and ensure enough ventilation while observing symptoms which include excessive coughing over a long period of time and feverishness, and report early for diagnoses and treatment.