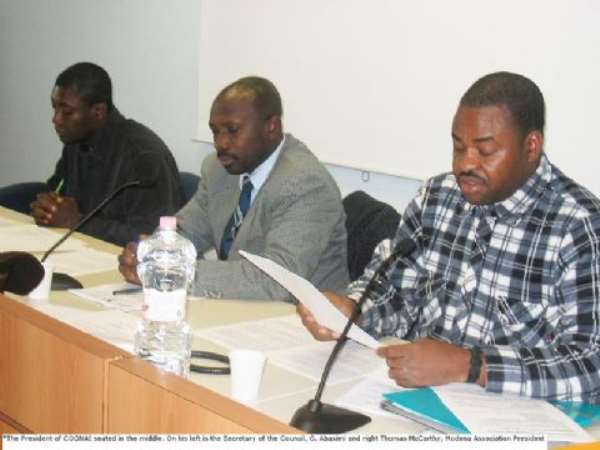 ...AGAINST EMBASSY AND NPP GOVT. The increase on documents fees at the Embassy in Rome has raised outrage among Ghanaians resident in Italy. The Council of Ghana Nationals Associations in Italy (COGNAI) at its meeting in the northern Italian city of Modena with representatives of the Associations is threatening to go on a massive demonstration against the news fees which they described as extortion. The Ghana Embassy has over the past 4months increased its fees on renewal and acquiring of new passport by over 73%. The new fees are, €200 for renewals against previous price of €115 and €300 in applying for new passport against previous fee of €215. The Embassy may charge €500 for missing cases. Visa fees and all other documents fees has shot up by 50% Authourities of the Mission insists the new fees were directives from the Ghana government. The President of COGNAI, Omari Somuah, noted that since the increment was announced the Council has walked through a diplomatic path by calling on the Embassy to meet and discuss the issue but they failed to respond. In its further approach, the Council has written a petition letter to the Speaker of Parliament and Minister of Foreign Affairs in October but that has also not been replied.
At its latest meeting both the Council and the Associations representatives says they are still going to approach the issue diplomatically by writing a reminder with copy to the office of the Ghana President, J.A. Kufuor, but warned if that also fails to resolve the matter then Ghanaians in Italy would converge in their numbers infront of the Embassy in Rome to tell their story to the whole world. Furious Ghanaians in Italy have been making derogatory remarks against the Ambassador, Dr. Kofi Dsane- Selby describing him as not working for the good course of Ghanaians in the country and wants him relieved of his post. In a particular incident, COGNAI described the Ambassador's behaviour as shocking when three members of Parliament were in Italy to explain the voting right of Ghanaians abroad in Presidential and Parliamentary elections. At that meeting the Ambassador rebuffed any attempt to discuss the passport issue. The Ghana Association in Rome has refused to compile list of Ghanaians in its communities as directed by the Embassy until the issue of passport increment is resolved. The President of COGNAI revealed that between June 2005 and September 2006 over 20,000 Ghanaian passports in Italy are due for renewal which alone will fetch the Embassy and for that matter the government of Ghana €1.7 million taking into consideration the new fees. Somuah said the increase of €85 being charged by the Embassy for renewal of passport in Italy is an exceptional case as compared to the Ghana Missions in France, Belgium, England, Germany or elsewhere in Europe. He described the statement made by the Embassy in judging fees in each country being based on economic situation as unreasonable and baseless and asked what criteria was used to arrive at the current fees when Ghanaians in Italy earn equally or even less than their compatriots in other European countries.
(2) GHANAIANS IN ITALY THREATENS DEMO AGAINST EMBASSY AND NPP GOVT.
The President of the Council also spoke on reports that the government is making a meal out of Ghanaians in Italy because its been observed many of them are putting up fine houses in Ghana. According to Somuah other reports have it that the reason for the increment is Ghanaians in Italy are using the Ghana passport in an inappropriate and illegal manner –the so called 'conections'. Reacting to these reports the President argued that those 'connections' passports are passports being issued in Accra and called on the authourities to remedy the problem in Ghana than to blame it on Ghanaians in Italy.
The Council finally questioned the extra fee of €85 on Ghana passport in Italy with the government announcement that the Ghana passport would be changed in due course. One aggrieved Ghanaian painted it this way, “after we've been milked clean by the government they will change the passport.”
COGNAI says it will give itself sometime to wait for the outcome of the reminder letter before taking their next line of action.