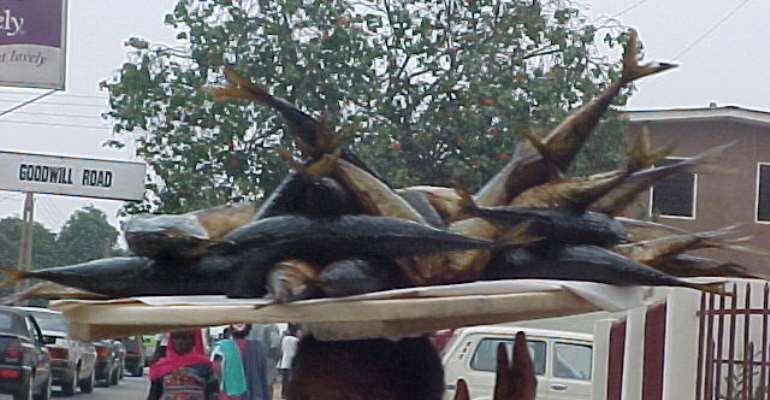 GHANA spends nearly 100 million dollars a year to import 200 metric tonnes of fish to supplement domestic production.
Mrs Gladys Asmah, Minister of Fisheries, who disclosed this at the ministry's turn at the "Meet-the-Press" series in Accra yesterday, said the country's fish consumption requirement is 720,000 metric tonnes, while supply is only 400,000, a deficit of 320,000 metric tonnes annually. To remedy the situation she said the Ministry has started the process of preparing a strategic framework for the development of aquaculture.
The key issues identified for immediate attention include aquaculture input, pond construction technology, fingerlings and feed production.
She said the ministry had also put in place institutional, educational and training programmes aimed at improving the industry. This includes a training programme for youth fish farmers in pond construction for which about 200 fish farmers have been trained and 1,000 more programmed for training next year.
The Minister said nine farmers have also been trained in Thailand and Uganda in hatchery management and fingerlings production and seven more would be trained next year.
She announced that her ministry would make available about 15 million fingerlings from both the public and the private sectors to 100 fish farmers by the end of the year.
Mrs Asmah said the ministry would initiate and complete two hatcheries at Dormaa Ahenkro in the Brong Ahafo Region and Sefwi Wiawso in the Western Region next year to increase fingerlings production by 15 per cent by the end of next year.
She said there was an urgent need to increase fish production to improve the country's fish food security and produce more fish to increase fish intake which is less expensive than meat and poultry.
Mrs Asmah said seven landing sites would be constructed along the coast and the Volta Lake to modernize the industry and improve its production capacity.
The sites are Axim, Elmina, Mumford, Jamestown, Teshie, Dzemeni and Abotoase for which feasibility studies are being undertaken.