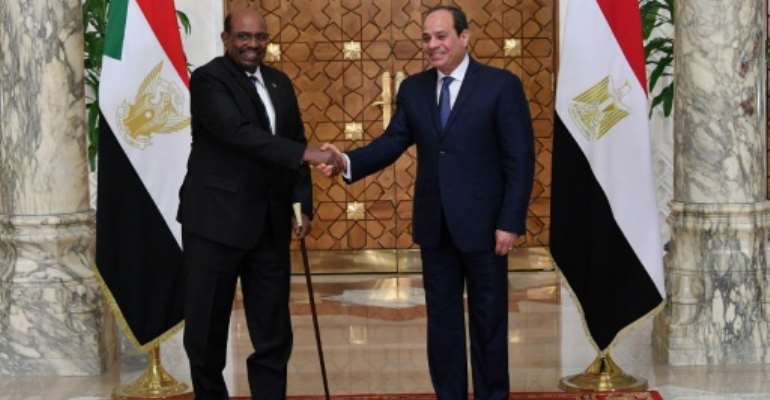 This week's dispute comes despite warming ties between Egypt and Sudan, whose presidents Abdel Fattah al-Sisi (R) and Omar al-Bashir met in Cairo in January. By STRINGER (EGYPTIAN PRESIDENCY/AFP)

Sudan summoned Egypt's ambassador to Khartoum on Thursday to protest Cairo's "illegal" call for oil and gas exploration bids in the Red Sea area of Halayeb, claimed by both countries.

Egypt's control of the Halayeb triangle, which lies in a mineral-rich border region, has for decades been a bone of contention between Cairo and Khartoum, despite an overall improvement in ties since an October summit.

On March 10, Egypt's state-owned South Valley Egyptian Petroleum Holding Company invited bids for 10 oil and gas exploration blocks in what it said were Egyptian territorial waters in the Red Sea.

"Sudan is asking Egypt to stop all procedures concerning the tenders given the situation about the Halayeb triangle."

Sudan has regularly protested at Egypt's administration of Halayeb and the Shalatin border region near the Red Sea, saying they are part of its sovereign territory since shortly after independence in 1956.

On Wednesday, Sudan had warned Egypt against its offer of exploration blocks.

Sudanese minister of state for oil and gas Saad el-Deen el-Bushra said the move was "a direct intrusion" onto his ministry's authority to grant exploration licenses in the area.

On Thursday, the foreign ministry summoned the Egyptian ambassador and urged international companies working in the area to not to submit bids for the blocks.

"The government of Sudan can take measures to prevent any company from operating in this area," the ministry warned.

It did, however, call on Cairo to resolve the situation "through peaceful means" to avoid damaging the improving ties between the two countries.

Relations between Cairo and Khartoum had turned sour in early 2017, when Sudan's President Omar al-Bashir accused Egypt of supporting rebels in conflict zones, including Darfur in western Sudan.

But in October, it lifted the ban as ties improved following talks in Khartoum between Bashir and his Egyptian counterpart Abdel Fattah al-Sisi.

Egypt has this year repeatedly called for stability in Sudan after protests erupted on December 19 against Bashir's three-decade rule.

Demonstrations and deadly clashes erupted after a government decision to triple the price of bread.

Bashir has remained defiant, imposing a nationwide state of emergency on February 22.