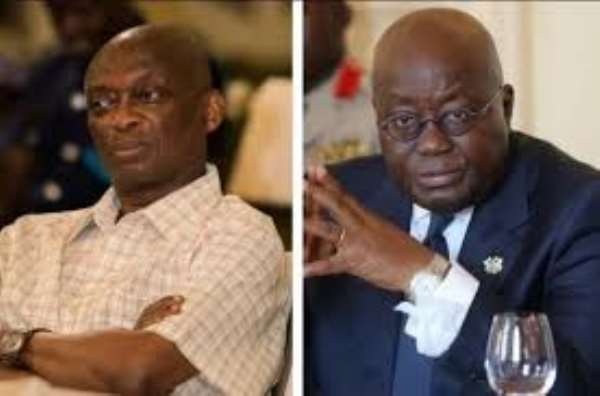 The above quotation was from a veteran journalist called Kwaku Baako, Jr when he called into the Osei Bonsu’s show on Asempa FM on Monday. That was the quotation he used to describe the behavior of the President, Nana Akufo Addo, the inter-ministerial committee overseeing the ban on galamsey, Charles Bissiw and the NPP. He said some of “us” didn’t campaign for Nana Addo to be President only to listen to such jokes by jokers, so the President should sit up if he is sleeping. If Kwaku Baako, Jr is calling the President and NPP jokers, who are you a beggar, to be defending them on radio and on TV? You should know that Nana Addo and the NPP are struggling to hold unto the last straw on the river. Their end has come!

It all started when Charles Bissiw, the alleged thief, was earlier on the show bragging that the government had requested for the raw documentary by Anas on galamsey but for a week or so now, Anas has not been able to produce that video to the government. He dared Anas to produce any such video if it existed. This is where it got to Kwaku Baako because he knew what Charles Bissiw was saying, if not corrected, would get into the minds of the uneducated NPP folks and they will misuse the information. Remember, the Minister for Information had earlier made us to understand that it was the government that had requested for the raw video.

Kwaku Baako, Jr told the world that when Charles Bissiw was lying on air, he, Charles Bissiw knew that Anas and his Tiger Eye had already submitted the raw video and petitioned the Special Prosecutor over the corruption at the Inter-ministerial committee/Flagstaff House but Charles Bissiw and his bunch of thieves, instead of adding to the petition with the Special Prosecutor, chose to petition the Criminal Investigation Department. (CID) You see why the Minister for Information and Charles Bissiw had attempted to lie to Ghanaians by saying Anas had not submitted the raw video to the government? NPP, that one hailed the creation of the Office of the Special Prosecutor is now running away from it and seeking cover at the CID. As of today, the man who promised to fight corruption, Nana Akufo Addo and the alleged thief, Charles Bissiw, both work in the Flagstaff House. If you don’t call these people lairs, corrupt and jokers, what else can you call them?

Then you ask yourself, where is the President in all of these? The man who promised Ghanaians that he is coming to fight corruption. Nana Akufo Addo is associated with every corruption in Ghana now and he continues to clear his corrupt appointees because he is one of them. The NPP are trying hard to disassociate Nana Addo from corruption but the more they do, the more they look like jokers. Since in 2020, NPP can no more tell Ghanaians that Nana Addo is not corrupt and can never be corrupt, that strength of Nana Addo is gone and he will be going into the 2020 elections as a limping candidate. Any little stone would knock him down as the most corrupt and disgraced President in the history of Ghana.