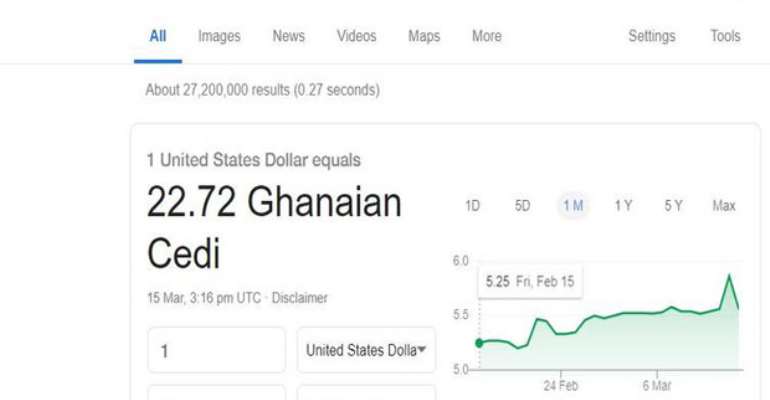 Google's currency converter widget on Friday, 15th March, 2019, displayed a cedi to dollar rate that was four times the actual value, alongside erroneous market rates of a number of currencies against the Ghanaian Cedi.

But the global online company has contacted Ghanaian authorities, the Ministry of Finance to be precise, following the glitch in the Cedi to dollar conversion rate, admitting the malfunction of their portal is, “regrettable.”

In a letter addressed to the office of the Minister for Finance, Ken Ofori-Atta and the Governor of the Bank of Ghana, Ernest Addison, Mrs Titi Akinsanmi, Google's Head Public Policy & Government Relations, West and Francophone Africa said: “we are aware of the issue of inaccurate conversions for Ghanaian Cedi currency on Friday the 15th of March. This was caused by a minor glitch that was quickly fixed.”

She said Goggle has always sought to provide people with the most relevant, useful information to help them to make the right decisions, “but sometimes there are temporary issues that can cause people to have undesired experiences, like the one this past Friday. This was regrettable,” said Mrs Akinsanmi.

Although she expressed regret over what has affected two other countries since the beginning of the year, Mrs Akinsanmi stopped short of apologizing for the glitch.