If Akufo-Addo Isn’t Living Up To Expectations, Let’s Try Akua Donkor, Not Mahama 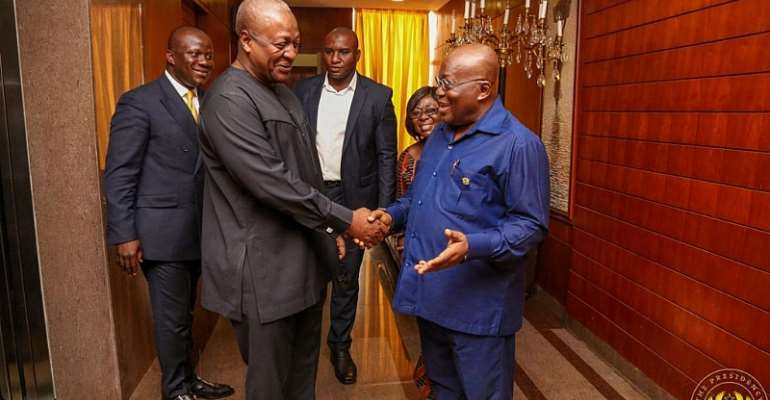 In a fairly stable democracy such as ours, governments pop in and pop out, and, given the political dynamics in Ghana, it is a trend we can expect to continue regardless.

That said, the all-important question discerning Ghanaians should be asking is: should we trust every political party to form a government with an excuse of steering the nation to the right direction?

The vast majority of unhappy Ghanaians, rightly so, voted against the NDC and Ex-President Mahama in the 2016 election largely due to the unresolved business crippling dumsor, the unpardonable incompetence and the wanton sleazes and corruption which brought untold miseries upon Ghanaians.

Delightfully, however, the hitherto asphyxiated economy and the business crippling dumsor have since been brought under control by the NPP government under the able leadership of President Nana Akufo-Addo.

There is no gainsaying the fact that some of us were extremely livid when former President Mahama out of meaningless benevolence doled out large portions of our scarce resources to inveterate NDC apologists like the founder of Ghana Freedom Party (GFP), Madam Akua Donkor, who in all honesty, contributed nothing meaningful towards Ghana’s wellbeing.

Ghana, to be quite honest, does not need a Father Christmas who would carelessly give away our hard earned resources. But Ghana rather needs a serious, a committed and a forward-thinking leader who can utilise our scarce resources judiciously to the benefit of all Ghanaians.

Suffice it to emphasise that a judicious distribution of national resources is the implementation of social interventions such as Free SHS and the School Feeding programme.

Dearest reader, considering the enormous benefits therein education, it is, indeed, prudent and somewhat forward-thinking for any serious and committed leader to seek to bridge the ever widening social inequalities gap through rational distribution of national resources in the form of free SHS and other social interventions.

There is no doubt whatsoever that discerning Ghanaians were extremely concerned when out of unpardonable dereliction of duty and uncontrolled corruption, Ghana’s debt ballooned dramatically from GH9.5 billion in 2009 to an incredible GH122.4 billion as of December 2016.


Let us face it, though, no true Ghanaian should shrill and thrill over the GH800 million dubious judgment debt payments, including the GH51.2 million to Woyome which resulted in the drastic reduction of capital expenditure, and as a consequence, most contractors were not paid by the erstwhile NDC administration.

It is, however, worth stating that in spite of the seemingly insuperable odds, since assuming power, the Akufo-Addo’s government has taken commendable strides to improve the social mobility through implementation of poverty reduction policies such as free SHS, one district one factory, one million dollars per constituency, tax reductions, a dam per village in the northern part of Ghana, among others.

It is absolutely true that individuals have different reasons for going into politics. Some people enter into politics for their unconditional love for their nation. Others just view power as an excellent opportunity to amass wealth and enjoy other trappings that come with the job.

In fact, it would appear that some politicians do not care about the plight of the masses; they only scramble for power in order to pursue their vested interests.

And, as a result, we have over the years been electing dreadful economic managers who cannot see their backsides from their elbows and have only succeeded in sinking the economy deeper and deeper into the mire through corrupt practices.

Truly, the rampant corruption and the unobjectionable incompetence under the erstwhile NDC administration will long be stencilled on the mental sheets of succeeding generations.

Unfortunately, however, the following cacophonous renditions have been the usual anthem of the brassbound loyalists of National Democratic Congress, who are still nursing the wounds from their humiliating 2016 election defeat.

“You shrieked, grumbled, censured and tagged us corrupt and incompetent and as a result the vast majority of Ghanaians bought into your isolated thinker’s assertion and voted us out of power, so stop your relentless grouching and fix the pieces together”.

“Indeed we woefully failed to resource the security forces adequately and as a result they could not confront the rampant crimes head-on, but you are now in charge so equip the security forces and see to it that the insecurity is brought under control as soon as practicable”.

“We informed you that we have voraciously consumed all the meat on the bone, but you ignored us and told discerning Ghanaians that we were kidding”.

“Now that you are in power, display your magical powers and put more meat on the bone in order to feed the impoverished Ghanaians and erect more infrastructural projects”.

“We could not manage the economy and that was the reason why discerning Ghanaians voted you into power, so put a stop to your endless lamentations and breathe life into the asphyxiated economy”.

Dearest reader, this bizarre attitude, so to speak, could be seen as a listless resignation on the part of a political party that wants to win power. With all due respect, why are they so desperate to reclaim power if they are indeed not prepared to govern?

Obviously, it is extremely frustrating to listen to the views of inflexible NDC supporters, whose lives did not transform under the NDC government, contrary to what their leaders would want us to believe.

Sadly, however, the inexorable apologists won’t depart from their so-called loyalty.

What is more, despite their leaders much touted social democratic ideals, the successive NDC governments failed to implement a single social intervention, but the die-hard supporters are unmoved by such an unpardonable dereliction of duty.

Apparently, it was the NPP Party under the able leadership of President Kufuor that introduced the free Maternal Care, the School Feeding Programme, the National Health Insurance Scheme, the Mass Transport System, the Livelihood Empowerment Against Poverty (LEAP), the National Youth Employment Programme, now known as GYEDA, and many other social interventions.

As a matter of fact, the NDC leaders have been manipulating their way into power all the time. For they usually resort to vague rhetoric and political gimmicks.

Yes, they are cunning lots who are ever so desperate to secure power for their own vested interests. For if that was not the case, how come they turned their back on almost all the promises they gave to the unsuspecting Ghanaian electorates?

Ironically, with all the promises, former President Mahama and his NDC government failed to end the dumsor, failed to implement the one-time NHIS premium, jobs were not readily available for the jobless, the economy sunk deeper and deeper into the mire, they reneged on their promise to keep ‘lean’ government, Ghanaians became poorer and poorer, sleazes and corruption escalated to immeasurable proportions, endless borrowings amongst others.

So, to the brassbound NDC loyalists: engage in a carefully considered reflection and consider voting instead for Madam Akua Donkor since you love to hate NPP for no apparent reasons.

As a matter of fact, Madam Akua Donkor, who has no classroom education will not even go for unreasonable loans and then resort to IMF stringent conditionalities.

And more so Madam Akua Donkor, who is a devoted farmer, knows the importance of agriculture in the economic growth of a country like Ghana.

So, Madam Akua Donkor will definitely pay attention to the agricultural sector and ensure that the sector does not grow 0.04 as happened in Ex-President Mahama’s government.

It is quite bizarre that the brassbound NDC faithful who are currently enjoying uninterrupted electricity, reductions in electricity tariffs, low inflation, tax reductions, favourable economic growth, gargantuan savings on free SHS, amongst others would have the temerity to censure the NPP administration.

Ghana under the erstwhile NDC administration, so to speak, went into economic meltdown which regrettably brought to pass harsh socio-economic standards of living.


Thus, it would be somewhat unreasonable for anybody to suggest that to err is human, so the insensitive NDC must be given another chance so soon to come and mess up the country.

The author has 992 publications published on Modern Ghana.