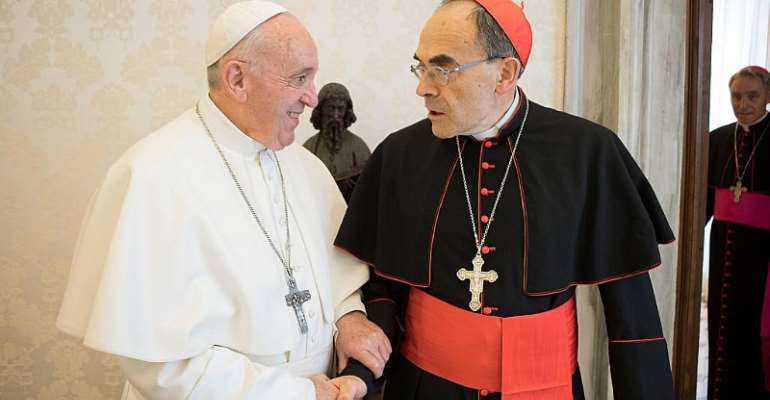 Pope Francis has rejected the resignation of French Cardinal Philippe Barbarin, the Vatican announced Tuesday, despite the cardinal's conviction this month of covering up decades of sexual abuse by a priest under his authority.

The pope “invoked the presumption of innocence," the cardinalsaid in a statement on Tuesday, with regards to the six-month suspended sentence he was handed this month for failing to report sex abuse by a priest in his diocese.

Barbarin, who is appealing the verdict , met with Pope Francis on Monday to personally hand in his resignation, but both the cardinal and a Vatican spokesman, Alessandro Gisotti, said on Tuesday that the pope had not accepted it.

"I can confirm that his Holiness has rejected the resignation of Cardinal Philippe Barbarin," Gisotti wrote in a statement, adding that the pope is "conscious of the difficulties" facing the Lyon diocese and has given Cardinal Barbarin a free hand “to make the most appropriate decision for his diocese.”

Instead, the Vatican said the cardinal, one of the highest-ranking and best-known Roman Catholic officials in France, will step aside for an unspecified length of time.

At the pope's suggestion, Barbarin said he would hand over "for a while” the day-to-day running of church affairs to Father Yves Baumgarten, the vicar-general in Lyon.

Guilty of covering up abuse claims

The Vatican's decision has triggered sharp surprise from the chairman of the Bishops' Conference of France, Georges Pontier.

"I did not expect this scenario which falls between the two most expected," Pontier told French news agecny AFP, adding that this "unheard of" situation resulted from the difficulty of "respecting the judicial process" along with the need to "look after the Lyon diocese".

On March 7th, a Lyon court ruled that Barbarin, a cardinal since 2003, was guilty of failing to report allegations of abuse of boy scouts committed by a priest, Bernard Preynat, in the 1980s and 1990s.

Father Preynat has admitted to some abuse in letters to victims' families, and is awaiting trial on charges of sexual abuse of minors.

'One mistake too many'

His former victims have reacted angrily to news that Barbarin--who only removed Preynat in 2015--was staying put.

Francois Devaux, a co-founder of a victims' organisation, said the pope has made "one mistake too many."

"I think that man [the pope] is going to manage to kill off the church. It's a mistake too many. It just shows how right we are and how this whole problem is part of the dogma," he added.

The case against Barbarin comes as the pope seeks to restore faith in the Church following a slew of abuse scandals that have spanned the globe, from Australia to Chile and the United States.

Less than a week after Barbarin's conviction on 8 March, the Vatican's former number three, Australian Cardinal George Pell, was sentenced to six years in prison by a Melbourne court for the "brazen" sexual abuse of two choirboys.