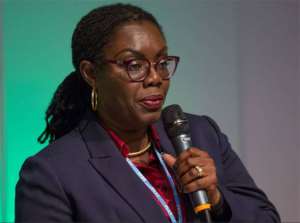 Communications Minister, Ursula Owusu-Ekuful, has called for stronger ties among the 63 member states of the Budapest Convention on Cybercrime.

According to the Minister, each of the 63 states need to identify their unique role and obligations to ensure the effective implementation of the Convention.

Failure to cooperate effectively, she said, will mean that the various states risk sinking together.

The Minister made the call on Monday, March 18, in Accra at a conference on the technical implementation of the Budapest Convention on Cybercrime.

The workshop was organized by the Council of Europe in partnership with the Ministry of Communications.

She stressed that the implementation of the Convention was a collective responsibility.

Mrs. Owusu-Ekuful explained that “there is the need to address cybercrime issues and strengthen cybersecurity as a matter of urgency to ensure that we derive the full benefitof our emerging digital economy while minimizing the risks.”

She indicated that “the increased volumes of online transactions comes with the inevitable increased risks for users of the various online platforms, with telecommunication service providers reporting year on year increases in mobile money fraud cases.”

“About 400,000 scam messages,” she noted, “are blocked from reaching their recipients on a daily basis. Half of all mobile money subscribers have either experienced some form of fraud or been targets for mobile money fraudsters.”

According to her, “the identities of several Members of Parliament and Ministers have been cloned on Facebook and other social media platforms. As quickly as these fake accounts are pulled down, others spring up.”

Fake news is spreading like wildfire on social media platforms, constituting a real and present security threat. These are only some of the more common cyber threats we are exposed to but there are others.

Mrs. Owusu-Ekuful lamented that lack of effective cooperation at the domestic level has impacted on member states' ability to fight cybercrime.

“I have been informed that most operators do not comply with some of these legal obligations.

Indeed, there is a case in which a High Court issued an order to a telecommunication operator to provide call logs to assist the police CID in their investigations, in accordance with Section 103 of the ETA.”

She added that “the police CID did not receive a response from either the Head of Legal or any other senior official but got a dismissive note from an Administrative Assistant stating the non-availability of the requested information.

This attitude must change if we are to make any headway in tackling cybercrime.”

She announced that the Ministry of Communications was working on a draft cyber-security legislation which will address some identified weaknesses in Ghana's cybercrime laws and make provisions for appropriate sanctions for non-compliance with our cyber-security provisions.

In addition, she said, the Council of Europe has assessed our current cybercrime legislation and identified some gaps which we need to fill in order to achieve compliance with the Convention.

In 2018, Ghana acceded to the Convention on Cybercrime as the 62nd state party to have signed the Budapest Convention which is so far the only globally recognized treaty on Cybercrime.

It became the 5th country on the African continent to have acceded to the Convention, after Mauritius, Senegal, Cape Verde and Morocco.

Program Manager of the CyberCrimes Unit at the Council of Europe, Matteo Lucchetti,

That, he said, represented 11 persons per second.