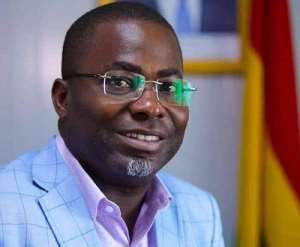 Mr. Bissue stepped aside recently as secretary to the Inter-Ministerial Committee on Illegal Mining (IMCIM) after Mr. Anas aired a documentary in which he was caught allegedly taking bribe to allow a company carry out mining activities during the ban on all small scale mining in Ghana.

On Friday, 15 March, 2019, Mr. Bissue indicated that he was invited by the Criminal Investigation Department (CID) of the Ghana Police Service to help them with their investigation to the said case.

Speaking after the visit to the CID, he said “I have subjected myself to the laws of Ghana and since no one is above the law, I urge Tiger Eye PI and Anas Aremeyaw Anas to provide the CID with the 'raw unedited footages', so that the good people of Ghana can have the benefit of knowing the truth.”

He recounted “on Wednesday, 27 February 2019, the Tiger Eye PI aired a documentary entitled “Galamsey Fraud” alleging a case of bribery and corruption to my person, Charles Bissue.”

He said “subsequently, on Friday, 1 March, 2019, Government through the Minister for Information, Hon. Kojo Oppong Nkrumah assured the general public of its commitment to the fight against galamsey.”

He added that “In his statement, the Minister stated that the said case will be “properly investigated, using the raw unedited footages” and “If any persons are found to have solicited money or taken bribe to bend the rules, the necessary action will be taken.”

According to him, “I subsequently stepped aside as the Secretary to the Inter- Ministerial Committee on Illegal Mining (IMCIM) for investigations to be carried out, stating that, '…I am prepared to avail myself, at all times, to the investigation process.”

He noted “I reiterate that, in the course of my duty as the Secretary to the IMCIM, I have never received any money as consideration to render a service as a public officer.”