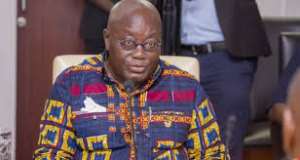 It never appeared to me as a surprise when the recent UEW impasse gave credence to Akuffo Addo's attack on academic freedom. Patience they say move mountains. I think it would have been prudent enough if Nana Addo had waited for the court hearing on Prof. Mawutor Avoke's appeal at the supreme court, but Akuffo Addo desperately and wholeheartedly inducted the disappointed Catholic Priest Prof. Afful Broni into office despite the overwhelming public opinion against that investiture. Perhaps I think the President would have saved the university and the entire community from this chaos if he had heeded to the rule of law.

Secondly,since is morally right to bring up those who helped you climb up the ladder,It was of no wonder to hear Prof Afful Broni promoting some lecturers who helped him to become the VC and dismissing others who stood against his by all means quest to become the VC since it was not in the right direction. Since the court has ordered for the compensation of Prof. Mawutor Avoke, I don't think Prof. Afful Broni would have been in office to orchestrate these hypocritical tyrannical rule if President Akuffo Addo had listened to the public opinion and waited on Prof. Afful Broni's investiture, hence Nana Addo is the problem

The attack on academic freedom is completely overwhelming. The despairing attempt by Nana Addo to remove Prof.Obiri Danso the KNUST Vice-Chancellor from office after the KNUST demonstration because he was perceived to be an NDC on my mind notwithstanding the desperately craved attempt by the Nana Addo led NPP government to remote control TEWU and UTAG by dictating to them to present their cronies as representatives to the KNUST governing council which was not in order and was not in the best interest of UTAG and TEWU. All these constitute the needless attack by Nana Addo on academic freedom hence Nana Addo is the problem.

How does that warrant Dr Sarpong's dismissal as a lecturer?

The demonstration which had Winneba Police escort was peaceful on the 12th and 13th March only for Nana Addo's appointee Hon Kwamena Duncan (Central Regional Minister) who has allegedly taken 50 road contracts in Central region to storm UEW North Campus and order the police to shoot at the students,brutalise them to leave their respective halls giving less than 4 hours for packing without considering their financial constraints and the distance most of them have to cover before reaching their respective homes.Hhmmm, Isn't it even pathetic to order Police men to shoot unarmed students who were agitating for justice?

Well, Kennedy Agyapong the dishonorable member of parliament ever on the other hand was seen in a video attacking the Central Regional Police Commander.Can insecurity under Nana Addo reach it peak to this extent?What is the Akuffo Addo government doing if he see's Kennedy's action as uncalled for?

Hhmmm,all we know is not lost,i will plead with President Nana Addo to stand firm and put in measures to strengthen education in Ghana since the development we all yearning for can never be achieved without good educational system in our homeland Ghana.