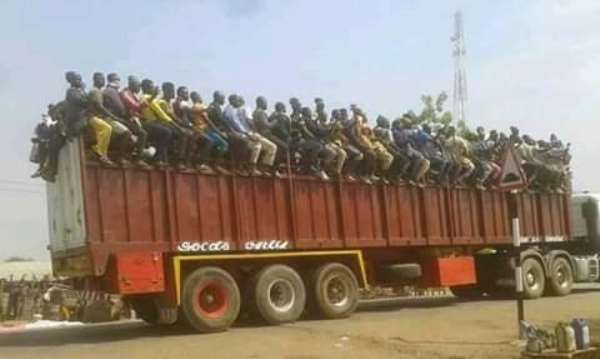 According to Buipewura, the activities of this hunters affects Gonjaland and his Traditional area and has since placed a permanent ban on their activities.

Many people in Gonjaland have complained about the age-long practice of group hunters moving into Gonjaland from other areas with the practice becoming rampant in recent years.

Many farms of poor farmers have burnt during the every weekend group hunting by people in their hundreds coming into Gonjaland in articulator trucks.

Buipewura explained that some of these hunters go to the extent of stealing farm produce during the process of hunting.

The number of these hunters are so great that every animal they come across is killed including sacred animals that have spiritual effects on Gonjaland.

Animals that are spared by the people of Gonjaland during certain periods are almost extinct now because the group hunters have killed them all.

Several acres of mango plantations, cashew plantations including other farm produce have been set ablaze in the course of hunting for wild animals. Rampa farms, who are into mango and cashew plantation in Langantere in the West Gonja District has over the years experienced periodic burning by this hunters. Many other farms in different parts of Gonjaland equally get burnt during the process of hunting by this group hunters.

Also, communities, where this activities of group hunting takes place, have their domestic animals killed and taken away.

Buipewura Jinapor (II) is, therefore, calling on especially those involved in group hunting to immediately put a stop that practice or have themselves to blame.