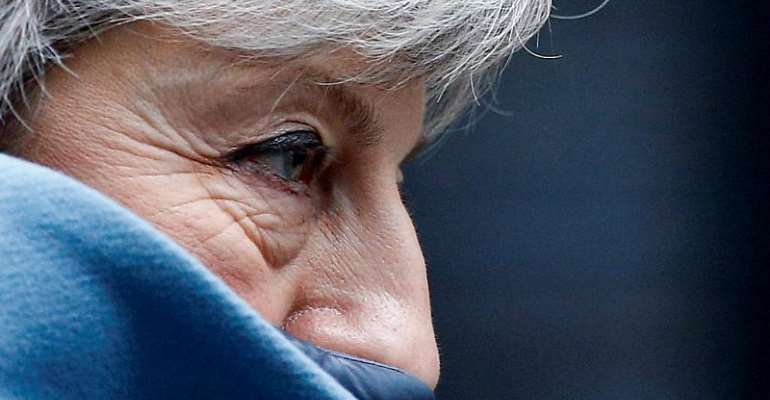 British leader Theresa May's government warned Sunday it might not hold a planned Brexit vote this week unless it feels it can secure a win that avoids a lengthy delay to pulling out of the EU. London has been paralyzed by political inaction and chaos as it barrels toward the March 29 end of its 46-year involvement in the bloc without a plan.

Parliament has twice resoundingly rejected the separation terms May reached with the other 27 EU leaders at the end of last year.

She reluctantly promised to bring them back by Wednesday for a third vote that, if succesful, would allow her to ask Brussels for a "technical" Brexit extension until the end of June.

But May cautioned Sunday that another defeat would almost certainly require a delay so long that Britain would have to take part in European Parliament elections in May.

This would mean "we will not leave the EU for many months, if ever," May wrote in The Sunday Telegraph.

Two top ministers then warned that May might hold another vote only if she felt confident of winning over rebellious members of her own party and its Northern Irish coalition partners the Democratic Unionist Party (DUP).

"It would be difficult to justify having a vote if you knew you were going to lose it," International Trade Secretary Liam Fox told Sky News.

Meanwhile, An EU diplomatic note, seen by British newspaper The Observer, of a meeting of EU ambassadors and senior officials, points at attempts to prevent a new prime minister from automatically annul the withdrawal agreement signed initially between May and Brussels, in the case that May is replaced in the coming months.

Some hardline pro-Brexit politicians like to replace her with a leader who will back a harder split with Brussels.

Several scenarios are possible before EU leaders gather in Brussels. If May does go ahead with the vote and it is successful in getting MPs to back her plan, the UK will ask Brussels for a short delay to Brexit that would secure a departure by the end of June.

May herself initially said this isn't ideal – but it beats the shock of a no-deal Brexit on March 29, and it will allow Britain to get its house in order in time to deliver the departure from the EU that Britons voted for three years earlier.

The real worry is that parliament will reject May's Brexit deal, forcing her to seek a longer-term extension to Brexit that would oblige the UK to participate in elections to the European parliament in May. People on both sides of the political divide say this would be farcical, with May herself warning it would be a "potent symbol of parliament's collective political failure".

Of course it should be pointed out that the UK does not have the power to unilaterally delay Brexit itself. Such a move would need to be unanimously approved by the EU's remaining 27 member states. So far the EU has indicated it's ready to grant the UK an extension on Brexit – if London puts forward a convincing reason as to why it's merited.

A source at the Elysée Palace cited by French daily Le Monde says France feels the solution to the stalemate “can only be found in London”. Chief EU Brexit negotiator Michel Barnier echoed that sentiment, saying Brussels had done everything possible for Brexit.

European elections are a stumbling block

The EU Commission president Jean Claude Junker earlier warned the UK that it must depart the EU before the European elections – or else take part.

“These elections obviously pose a problem because if the UK participates in them and sends MEPs to Brussels, this would be a truly complicated political move,” says Famke Krumbmuller, of the French political risk consultancy OpenCitiz. “On the other hand, if they do not participate and are not represented in Brussels even though they are still in the EU, then this is a massive breach of EU law – so it's unclear how they would get around that.”

Indeed, most commentators east of the channel say the UK will be required to present a clear way forward to what happens after June if they hope to guarantee a longer-term extention to Brexit. Not only would it mean participating in the European elections, it would also mean promising a new event of the political horizon that would end the impasse – such as second Brexit referendum, or general elections.