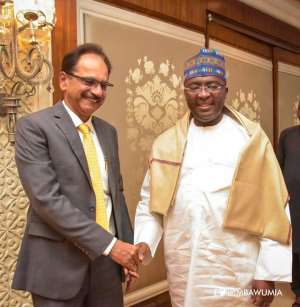 The talks were held in India on the sidelines of the 14th CII-EXIMBank Conclave on India Africa Partnership Project.

Commenting on the meeting in a statement, the Vice President said “this morning, as part of my participation in the 14th CII-EXIMBANK Conclave on India Africa Partnership Project, I had discussions with the leadership of Reliance Industries Limited, a leading oil and gas company in South-East Asia, led by its President – Development Petroleum E&P, Mr. Naresh K. Narang.”

He added in the statement that “we discussed, among others, the necessity and possibility for Reliance Industries Limited to participate in the value addition campaign by the government of President Nana Addo Dankwa Akufo-Addo , particularly in the area of crude oil refining.”

According to the statement, “we look forward to significant investments in the oil and gas value chain for enhanced economic development.”