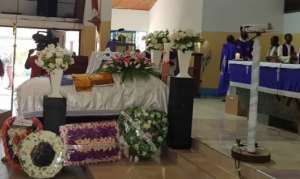 Father Appah noted that Mrs Asante stood for what was right hence her gruesome elimination from the earth stressing that 'If you want to live right and truthful you would be killed', he added.

He prayed for forgiveness for her murderer(s) while cautioning that greed, jealousy, and backbiting must not be encouraged among Ghanaians.

Mr. Michael Luguje, Director General, GPHA, speaking to the media on the sidelines of the funeral, revealed that Mrs Asante had a cordial relation with all employees and clients.

Mr Luguje noted that the vacuum created by the demise of Mrs Josephine Asante would be very difficult to fill.

He also called on the security agencies to work hard to bring the perpetrators of the crime to book.