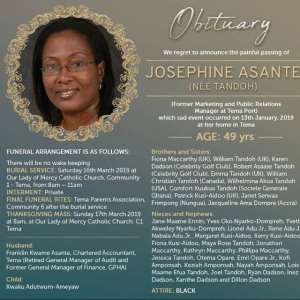 The final funeral rites for the late Marketing and Public Affairs Manager of the Ghana Ports and Harbours Authority (GPHA), Josephine Asante, who was murdered is being held today Saturday 16th March 2019. She was 49 years.

The funeral service will be held at the Our Lady of Mercy Catholic Church in Community 6, Tema this morning.

Final funeral rite proceeds at the Tema Parents Association School in Community 6 immediately after the interment at a private cemetery.

The funeral is expected to be attended by high profile personalities including widower, Franklin Kwame Asante and his only son, Kwaku Adutwuum Ameyaw.

On January 13, 2019, Ms. Asante was grusomely killed by unknown assailants at her residence at EMEFS Estate in Mataheko, a suburb of Afienya in the Ningo-Prampram District of the Greater Accra Region.

She was killed after she had returned from an end of year party organised by GPHA.

Two suspects, Christian Agyei and Amos Aprako, her houseboy and driver respectively, are standing trail in connection with the killing.

They have been remanded by the TDC District Court to reappear on March 28, 2019 after their semen, body fluids, footprints and fingerprints have been taken by prosecution over suspicion of sexual assault in the case.