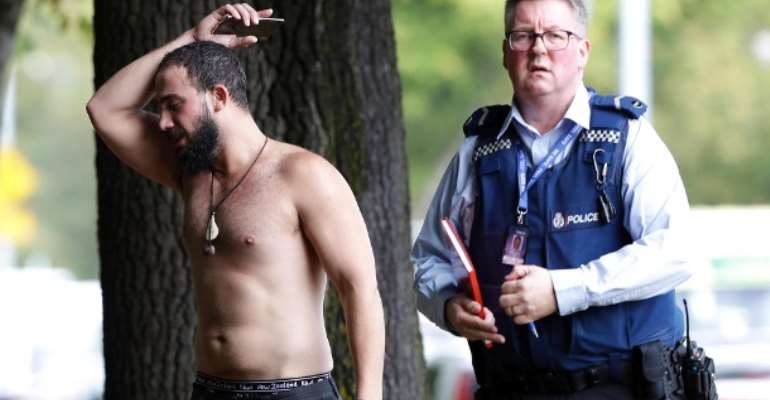 New Zealand Attack: A policeman and a survivor in front of the mosque

In New Zealand, at least 40 people were killed in an attack on two mosques. The situation is confusing, but the motive for the action seems clear.

A coordinated attack on two mosques in the town Christchurch, New Zealand, has killed dozens of people. Prime Minister Jacinda Ardern spoke of at least 40 deaths. The attacks were perpetrated in the Masjid al-Noor mosque in the city center and in a mosque in the suburb of Linwood. Four suspects have been arrested. These are three men and one woman, said Police Chief Mike Bush.

On the vehicles of the attackers, explosives had been found that had been defused by the army. Prime Minister Ardern classified the attack as an act of terrorism. "It's clear that this can only be described as a terrorist attack." Australian Prime Minister Scott Morrison said the attack was perpetrated by an "extremist, right-wing, violent terrorist". This is an Australian-born citizen of his country

More than 300 people in the mosque According to eyewitness reports, the first shots were fired at 1:45 pm local time (1:45 am CET). In the Masjid al-Noor mosque were, therefore, more than 300 faithful. According to witnesses, the attacker is a white man wearing a helmet and bulletproof vest. With his automatic weapon, he is said to have repeatedly fired into the crowd. There is a video circulating on the Internet and various messages allegedly from the perpetrator. At first, it was not possible to reliably verify this.

Prime Minister Ardern commented on one of the "darkest days" in the history of her country. For such a thing there is "no place in New Zealand". At the same time, she expressed her condolences to the families of the victims. "New Zealand is their home, they should have felt safe here."

State buildings sealed off Police spokesman Bush spoke of a "very serious and tragic series of events" in a video message circulated on social networks. At the same time, he appealed to all Muslims in New Zealand to stay at home. "Under no circumstances should anyone in the country go to a mosque now."

The city of Christchurch sealed because of the unclear situation of all state buildings. In addition to schools, the city hall, the municipal library and museums were closed. Mayor Lianne Dalziel appealed to the residents to avoid the city center. She said, "Everyone is shocked, I never thought anything like this could happen here."