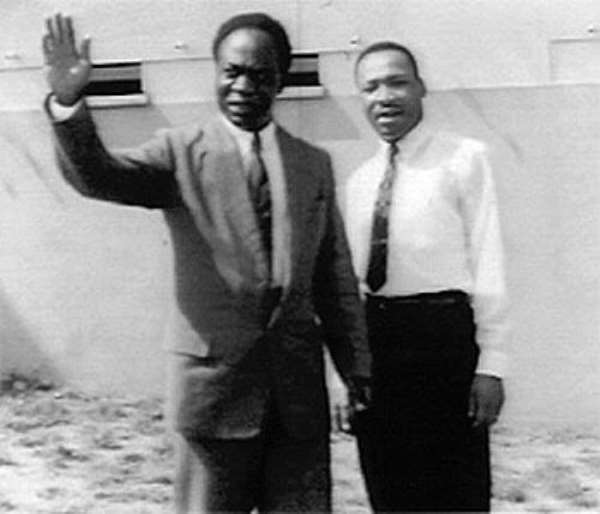 Here we are again my beloved twin sister Ghana to evaluate and celebrate our 62nd birthday. Incidentally, that was the age our late father has reached on earth before he was liberated from his overworked abused mortal body.

As many millions of people have discovered that our father Kwame Nkrumah Never Dies. His blood runs through our veins and his ideology lives on. His well thought out theories, his lofty ambitious thoughts, his grand ideas, his foresighted visionary plans, his passionate speeches and his many books not to mention the many memorable documented memories and the great many achievements that were achieved within a relatively short few years in government of the First Republic.

I salute our father and honour him and his legacy and what he stood for and bravely fought for. History vindicated him and continues to vindicate what he sincerely stood and fought for despite the futile burning of his books and unpublished manuscripts by his unpatriotic enemies and despite many attempts to re-write history by airbrushing big chunks of our history out.

Kwame Nkrumah Senior remains matchless and in many ways unequalled by any other politician the world over. Despite his imperfection, yet he was and still is the epitome of a role model of what an ideal African and Pan African should be like. He still remains the undisputed Shining Black Star of Africa and Africa's Poster Boy or to use his own day's language; the Greatest Show Boy Mother Africa has ever produced.

I salute Mother Africa and by the grace of God I will continue to work tirelessly for her Unity, Progress and Development whenever and wherever I may get the opportunity to do so ever since I have started in earnest back in 1981. I trust that God will continue to enable and empower me to do so and to fight the good fight despite the many challenges and until I drop. Then others must continue our selfless mission for the good of our people by the grace of God. So help us God, I pray.

Today on the 6th March I salute you my beloved twin sister Ghana as we celebrate your glorious birthday. On this same day 62 years ago you were declared born Beautiful and Free For Ever by our Proud Tearful Father surrounded by his cheering equally proud CPP comrades, in full view of the whole world of well wishers, jealous doubters, foreign agents even by unpatriotic traitors and would-be coup plotters, all rubbing shoulders together in the great onlooking crowd together with the ever watchful World Media! What a Great Unique Day that was in our history! Unforgettable Day by all accounts!!

Now that great day has become even greater to me personally as I mark the Second Anniversary of my dearly beloved Mother answering her Home Call leaving our world on that very same Awesome Day, on our 60th birthday! Wasn't that amazing? It could not have been a mere coincidence. It was surely by Divine appointment. The Lord Giveth and the Lord Taketh Away, So let the Name of the Lord Our Living God be For Ever Blessed, For Ever Praised and For Ever Glorified above any other Name in Heaven or Earth or anywhere else in God's Created Universe Now and Forever More. Amen.

I salute you my Great and Dearly Beloved Mother and I honour you and your Legacy and Memory and I Miss you Greatly and I still Mourn your Great loss but I always Thank God for your life of Silent Sacrifice and Self Denial.

On this Special Day, I Congratulate all Ghanaians for our Great Priceless inherited Legacy Gift of Independence and I Congratulate President Nana on this occasion and I invite him to take few minutes to ponder and to reflect as to the main reason why did his 2 immediate predecessors have managed to win the elections only once? Was it a coincidence? I sincerely believe it was not a coincidence.

I dare say that in my humble opinion, both men had good intentions and the Freedom and Ability to make Decisions and they had the Ability to Execute their Decisions while in Government. They also had the full knowledge that the Convention's People Party which brought us the Independence and brought Ghana into Being as an Independent Free Nation was shamefully and unfairly robbed of all of its assets and was willfully and systematically reduced and intentionally diminished to give unfair advantage to other parties at the expense of a diminished CPP as is the case right now.

In fact all Ghanaians (dead or alive or yet unborn), they all owe a great debt to CPP and to its Founder the Father of our Beloved Nation for Fighting So Diligently and Courageously and For Not Resting until Ghana was Declared Free For Ever; regardless of which part of Ghana they may originate from or which Party or Political View they may or may not Follow. So this is a National Disgrace and a Great Travesty of Justice which I expected our current President to succeed where others have failed and to Resolve this travesty within days or at most within weeks of coming to power, even if he intended to serve 1 term only like his 2 predecessors. As he was affiliated to CPP in his youthful start of his political life and his earlier activist days. As well as his extensive legal experience in Ghana. So it never occurred to me and I never expected the prospect that CPP may ever need even to consider taking the Government to Court for the Overdue Restitution by the Return of our Party's Stolen Assets as well as to being compensated for losses and subsequent damages.

I can conservatively confirm that more than 1 Million Nkrumahists who felt let down by the 2 self confessed Nkrumahists previous presidents have voted for Nana and his New party in 2016 giving him the long awaited opportunity to become our president as he has always desired and aspired and fought for that position for many years, as we all know. But the Nkrumahists are under NO Obligation to vote for him again or for his New party if he chooses to remain silent and do absolutely nothing and betray his Old CPP party and by so doing he would betray Ghana as a whole. I sincerely hope the president will not betray us and that he will act very swiftly now or very soon and will make up for lost time as all is not lost yet. Nana has almost 2 years before his mandate will come to an end. I rest my case.

Please let us all Come together, Celebrate together, Work together and Build our Homeland Ghana together for the benefit of All of us and All of our Future Generations.