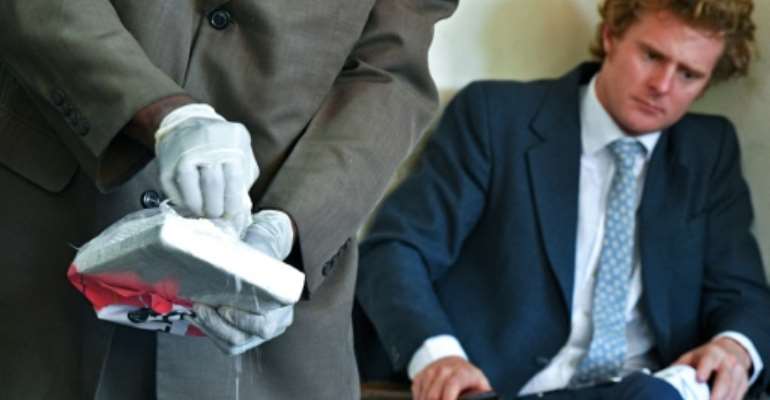 British sugar trader Jack Marrian went on trial in November 2016 after 100 kilos of cocaine was found inside a container of Brazilian sugar. By CARL DE SOUZA (AFP/File)

Kenya's High Court on Thursday dropped charges against a British aristocrat's son accused of smuggling cocaine worth $6 million (5 million euros) into the country.

Jack Marrian, a 33-year-old sugar trader, went on trial in November 2016 after seven sacks of cocaine were found hidden inside a container of Brazilian sugar at the port of Mombasa.

Despite mounting evidence that Marrian and his co-accused, Kenyan clearing agent Roy Mwanthi, knew nothing of the concealed drugs, the prosecution pressed ahead with the case.

Spanish police and the US Drug Enforcement Administration (DEA), which tipped off Kenyan authorities, said they believed the drugs had been destined for the European market but something went wrong and the cocaine was not off-loaded in Spain as planned.

Marrian's defence attorney argued in court that it was a classic "rip-on, rip-off" style of smuggling, whereby cartels place illicit cargo inside a legal consignment shipped by an unwitting owner.

In January, Director of Public Prosecutions (DPP) Noordin Haji called for the case to be dismissed, describing the pair as "victims of circumstances."

"It would not be in the public interest to continue with the prosecution of Marrian and Roy Francis Mwanthi who were caught up in a web of an international drug trafficking network," he said.

However, in an unusual move, the magistrate's court hearing the case declined to dismiss the case, prompting Haji to approach the High Court.

Handing down his ruling on Thursday, Judge Luka Kimaru said the court had "exhibited an unusual interest in the case that clouded it from appreciating the information placed before it that the DPP no longer believed they are criminally liable."

The court ordered that the drugs, which were kept as evidence, be destroyed within two weeks under supervision of a magistrate.

The case attracted attention partly because the cocaine seizure was large by Kenyan standards, and partly because of Marrian's lineage: he is the son of a British aristocrat whose family owns Cawdor Castle, the home of Shakespeare's Macbeth.

Marrian went to school with the Duchess of Cambridge.