Tension At University Of Education, Winneba 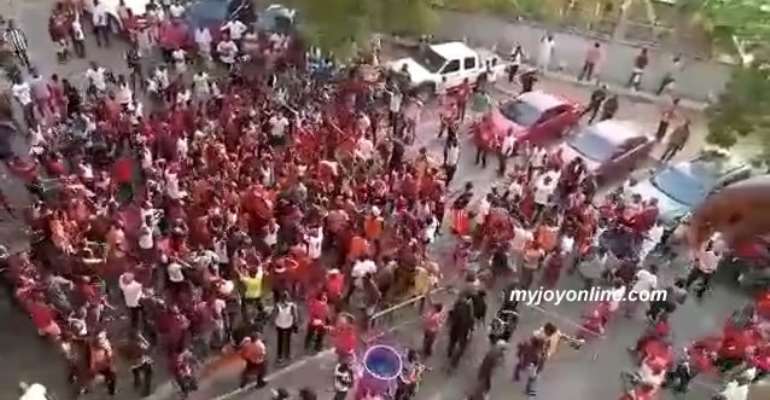 Students have escalated their displeasure over the sacking of three principal officers , rampaging through two of the university’s three(3) campuses.

Principal of the College of Languages Education at Ajumako Prof. Ephraim Avea Nsoh was sacked because he had not been cooperating with other management members, the Daily Graphic has reported.

The local President of the University Teachers Association of Ghana (UTAG), Dr. Frimpong Kakyire Duku,was sacked after initiating legal action against his employer “without any cause” and without exhausting internal procedures.

An Alumni representative on the University Council, Dr. Emmanuel Osei Sarpong, was sacked for showing disrespect to the Council and refusing to back their decisions.

The threats were realized on day two of their protests. A motely crowd of students in red T-Shirts and holding sticks charged up inside the North campus.

Starting at about 7am, they marched through the satellite campus and disrupted lectures.

Successful, the throng proceeded to replicate this design of chaos in the Central and South campuses.

At about 10am, they reached the Central campus and made mincemeat of meagre police force. They entered classrooms creating a scene until the students abandoned academic sessions.

Not only academic work was disrupted. The head of International Studies Prof. Yaw Sakyi Baidoo had his meeting with German guest interested on bi-lateral cooperation disrupted.

The Germans, having a firsthand experience of rampaging Ghanaian students over the sacking of their lecturers.

The Police overpowered at Central campus reorganized with reinforcements at the South campus, the last campus standing.

With water cannons and several police vehicles, a force of about forty fortified police officers fought off a rowdy row of students armed with sachet water.

The students have also demanded the resignation of their Vice-Chancellor Prof Rev, Fr. Anthong Afful-Broni who marked his first year in office four days ago.

He is the second Vice-Chancellor since the New Patriotic Party won power in 2017. His predecessor Prof. Mawutor Avoke was removed after a protracted litigation pushed by NPP MP Afenyo Markin.