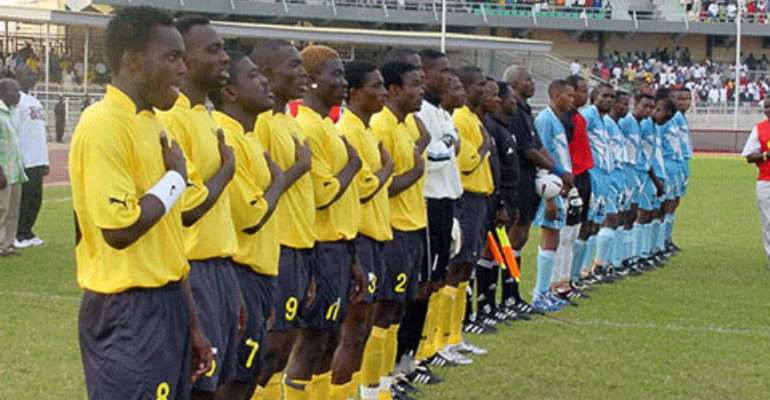 Ghana have been awarded Fifa's annual Best Mover of the Year award following their spectacular rise through the Fifa rankings.

The Black Stars, who qualified for their first World Cup two months ago, moved up 27 places to finish 2005 in 50th position.

Their almost continual ascent up the rankings gained them 80 points.

They will be presented with the award at the Fifa World Player Gala in Zurich on Monday.

"To be given this award by Fifa, is a great joy for the people of Ghana," Black Stars captain Stephen Appiah told BBC Sport on Monday.

"This award is big encouragement for us to work harder at next year's African Nations Cup and the World Cup."

The Black Stars topped off a successful year in admirable fashion under the guidance of their Serbian coach Ratomir Dujkovic, beating off such competition as South Africa and DR Congo to qualify for the World Cup.

"We thank our coach who has been very instrumental in our successes this year by bringing the much-needed discipline into the squad," Appiah said.

They recorded five wins including a 2-0 win over continental heavyweights South Africa in Johannesburg, three draws and not a single defeat in Fifa/Coca-Cola World Ranking-relevant matches.

Also worthy of note is their creditable performance in a friendly against African giants and former World Cup quarterfinalists, Senegal, which ended in a goalless draw.

The Terenga Lions were then ranked no less than 30 positions ahead of the Black Stars in the Fifa/Coca-Cola World Ranking.

Fifa's other team award went to Brazil, who top the rankings.

They are the Team of the Year, having been defeated only twice in 2005.

COVID-19 Vaccine will build body immunity after two weeks of...
4 hours ago

Parliament to roll out plan for covid-19 vaccination of MPs,...
4 hours ago