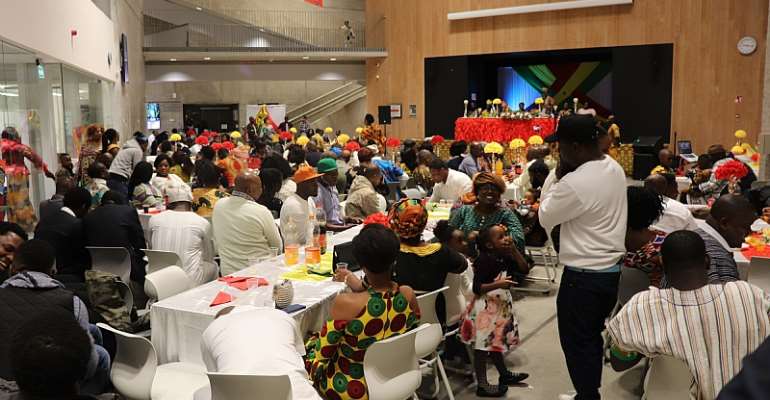 The event was organised by the Ghana Union Finland (GUF), an association of Ghanaian immigrants in Finland. It was an event well attended by many people from the Ghanaian community in Finland, Finns and other nationalities as well.

In a keynote address, the Ambassador of Ghana in Denmark, Mrs Amerley Ollennu Awua-Asamoa, called on all Ghanaians to regard peace and unity as key values in their daily lives.

The Ambassador noted that these are necessary values with which the whole country can develop. She therefore called for the need to end vigilantism, which is becoming a problem in Ghana. “Party vigilantism has now become an albatross hanging around our necks, which we need to eradicate.

“We can unite in diversity, and this is what the President of Ghana, Nana Akufo-Addo is preaching—to bring party vigilantism to an end. We want to train our youths with skills to be creative and innovative” and to counter disunity and party vigilantism, the Ambassador noted.

Mrs Awua-Asamoa therefore called for support from the Ghanaian Diaspora to bring to the government anything they have learnt from abroad to help transform Ghana.

She announced that the duration of the Ghanaian passport has changed from five years to ten years. Concerning the Representation of the People Amendment Act (ROPAA) and the diaspora’s ability to vote in national elections, she said Ghana’s Electoral Commission (EC) has set up a committee to come up with a roadmap to launch the ROPAA so that, hopefully, Ghanaians in the Diasporas can vote in 2020 or latest in 2024.

The Ambassador used the occasion in Helsinki to express the Embassy’s appreciation for the cordial relationship between the Mission and the Ghana Union Finland and indeed the Ghanaian whole community in Finland. The Ghana Embassy in Denmark has concurrent accreditation to Finland, Sweden, Norway and Iceland.

The Honorary Consul of Ghana in Finland, Ms Ulla Alanko, congratulated Ghana on the anniversary of her independence. Ms Alanko commended the Ghana Union Finland and the entire Ghanaian population in Finland for their efforts to project a good image of Ghana.

The President of the Ghana Union Finland, Dr Perpetual Crentsil, gave the assurance that the Union is committed to the wellbeing of Ghanaians in Finland and enhancing close cooperation and promoting peaceful and cordial relationships, the effective integration of Ghanaians into the Finnish society, as well as upholding the good image of Ghana abroad.

“The Union cherishes the solid and cordial relationship we have with the Ghana Embassy in Denmark. We acknowledged the Embassy’s immense help to Ghanaian immigrants in Finland as well as the usual support from the Honorary Consulate of Ghana in Finland,” she noted.

The President said the Union looks forward to continued collaboration with the Finnish Foreign Ministry and other Finnish bodies, the Embassy, as well as the Honorary Consulate to promote Ghana in terms of attracting investors on trade and investment in Ghana. She thanked all who have been contributing in diverse ways to the Union and its activities.

Elder Samuel Yaw Anini, a Patron of the Union who chaired the function, noted that despite Ghana’s heterogeneity and cultural diversity, the country’s various ethnic groups have co-existed, making it one of the most peaceful nations in Africa as exemplified by the harmony in which both Christians and Moslems live together.

He called for support for the “Ghana beyond Aid” message by Ghana’s President because the country provides one of the best platforms for doing business and for all to grab the opportunity and invest in Ghana. Elder Anini also appealed to all, as “Ghanaians in Diaspora who have learnt a lot from our host nations, to let us influence our communities in Ghana with the positive things we have acquired”.

Among dignitaries at the event were Mrs. Priscilla Ankomah, Minister Counsellor/Consular, Mr Elikem Ahadzi, responsible for Trade and Investment at the Ghana Embassy, Nana Yaw Essien and Ms Joyce Adda, both also from the Embassy, Apostle Edmund Appiah, National Head of the Pentecost Church in Finland, Pastor Atta Boakye of the Assemblies of God, as well as Mr Farooq and Mallam Mahmoud, both representing the Ghana Muslim community in Finland.

Others were Sir Wilberforce Essandor, a patron of the GUF, Dr. Ansah Bonsu and Dr. Emmanuel Quarshie, both elders in the Ghanaian community in Finland, as well as Nana Ekuoba Gyasi Gyimah and Nana Akua Ogyaa Asansuo, Omanhene and Obaahemaa respectively of Asanteman Kuo Finland.

The Finnish national anthem was sung by The Narrow Way group, made up of Ghanaian immigrants resident in Joensuu, to the admiration of all. The Precious Maidens group made up of Claudette Klutse, Claudelle Klutse, Dorinda Ansah, Samuela Ansah, and Betina Oppong, thrilled the audience with a well-rehearsed dance performance. The audience was also treated to tasty Ghanaian dishes of waakye, jollof rice, tuo zaafi (TZ), and doughnuts (“bofrot”).

A day before the celebration, Ambassador Amerley Ollennu Awua-Asamoa had led the Ghana Embassy’s Mobile Consular Team composed of the Minister Counsellor/Consular, Mrs. Priscilla Ankomah, and three other staff of the Embassy to conduct mobile consular services to Ghanaians and other nationals in Finland who wanted to process passport and acquire visas to Ghana.

The Union’s next activity will be the summer picnic in July 2019 to celebrate Ghana’s Republic day anniversary. 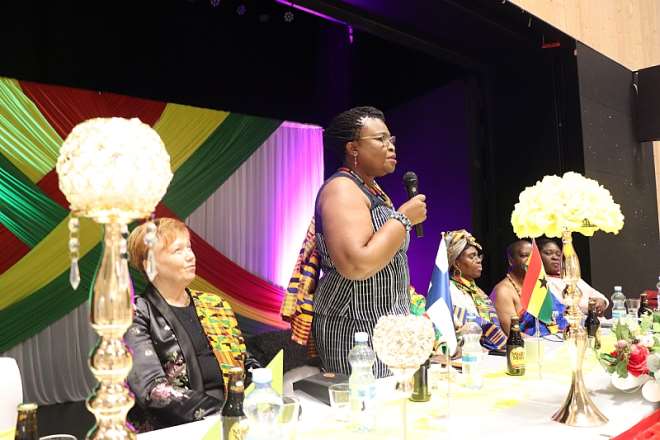