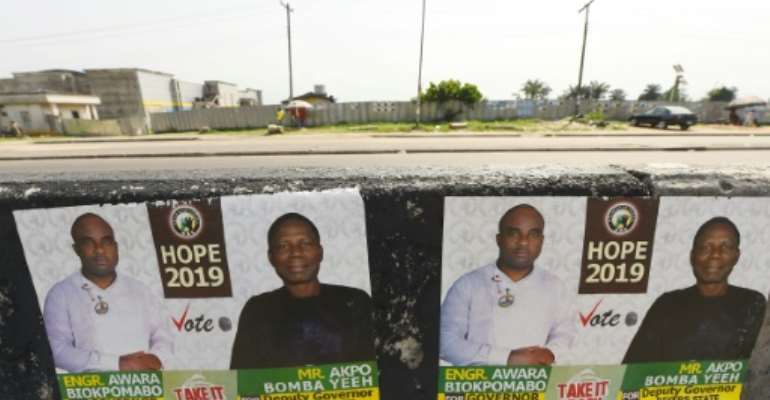 Gubernatorial campaigning in Rivers state, where the vote count was suspended on Sunday. By PIUS UTOMI EKPEI (AFP)

Nigeria's electoral board said on Tuesday governorship polls in at least six states were invalidated and would have to be re-run, amid opposition fury and the prospect of legal action.

State elections took place on Saturday in 29 of Nigeria's 36 states -- two weeks after President Muhammadu Buhari was elected to a second term, in a poll denounced by his main rival as fraudulent.

The INEC, the National Electoral Commission, said violence and other irregularities had prompted voting to be cancelled in some areas of Kano and Sokoto, in the northwest, Bauchi and Adamawa in the northwest, and the central states of Benue and Plateau.

"The commission will conduct supplementary elections on Saturday 23rd March 2019 to conclude the process," it announced Tuesday after earlier saying results in the six states were inconclusive and that another poll, in Rivers state, had been suspended.

The development comes after election observers criticised the organisation and running of Saturday's vote, as well as presidential and parliamentary polls on February 23.

The European Union said on Monday there were "systemic failings and electoral security problems" in both that indicated a "real need for serious reform".

President Muhammadu Buhari's beaten rival, Atiku Abubakar, of the Peoples Democratic Party (PDP), called the vote a "sham" and is challenging the result in court.

The PDP said it was "clearly leading the (governorship) race" in the affected states and accused INEC of collusion with Buhari's ruling All Progressives Congress (APC).

INEC was "seeking ways to use the situation to aid the APC to alter the results and announce APC candidates as winners", it said in a statement on Monday evening.

Sokoto governor Aminu Tambuwal said he would challenge the decision in court.

The situation comes after INEC suspended the count in the southern state of Rivers for 48 hours on Sunday after violence and the invasion of a collation centre by men in uniform.

The PDP called the suspension "a barefaced assault... akin to a coup d'etat". The military has blamed political thugs dressed in army fatigues.

Governors control huge budgets and are responsible for areas such as infrastructure, and the provision of health and education.

According to results declared by Tuesday morning, the APC was ahead by 11 states to nine.