Eye On France: Why Is Bernard Tapie Back In Court? 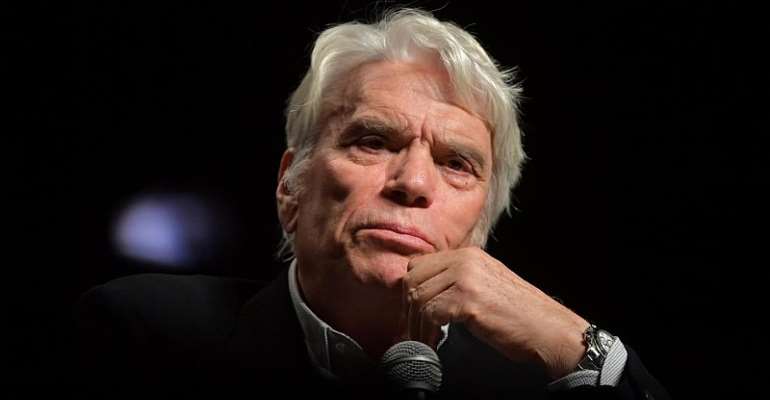 Yet another case involving French businessman Bernard Tapie opened in a Paris court this morning. The story is all over all the French daily newspapers. Who is Bernard Tapie, and why should we care?

Seventy-six years of age, suffering from stomach cancer, Bernard Tapie has been an unsuccessful pop singer, a dangerously unsuccessful motor racing driver, a television presenter, an actor, a writer, a businessman, a government minister, a football club owner, a newspaper publisher, and a frequent visitor to the republic's various criminal tribunals.

Today, Bernard starts another stint in a Paris courtroom, where he's accused of fraud and the misuse of public funds. He says he's on trial to protect his good name (let there be no sniggering in the background!) and that this latest brush with the judges won't have any financial implications. He's right.

But the trial could have other implications, like five years behind bars for the fraud part, or ten years in jail for the public funds.

Le Monde says this latest trial in the long-running mega-series involving Tapie, the French state, the sportswear company Adidas and the Crédit Lyonnais bank group, will lift the lid on the casual corruption of the French ruling class.

Le Figaro quotes a typically belligerent Tapie as saying the bank committed the fraud, not him.

Financial paper Les Echos says the trial which opens today and is expected to last five weeks is “the epilogue to an incredible judicial saga”.

The roots of the trouble go back at least 25 years, but the latest hearing is limited to the question of a 2008 decision which awarded 403 million euros to Bernard Tapie.

Well, something called an arbitration board decided that Tapie was correct in claiming that the bank Crédit Lyonnais acted improperly in buying and then re-selling at a huge profit shares in Tapie's Adidas sportswear company. Rounded up to the nearest million, Crédit Lyonnais made 700 million euros on the deal, while Bernard Tapie went broke, with debts in excess of 250 million euros.

All this buying and selling happened back in 1996 and followed the bank's decision to support Tapie in his efforts to buy Adidas for 24 million euros in 1990, when Tapie did not have two centimes to his name.

Three years later, Tapie's Adidas was losing money big time, no one wanted to take up the risk, and Tapie himself was now a minister in the Socialist government of François Mitterrand.

Finally, Crédit Lyonnais were told to sell off the company. The bank got 315 million euros for the operation which Tapie had snapped up three years earlier for a fraction of that price. And a subsidiary of the bank became one of the new shareholders, allowing Crédit Lyonnais to collect a further fortune as Tapie went down the drain.

Up with that he was not going to put.

Angry Tapie takes the fight to his creditors

So Bernard went to court, claiming that the bank had betrayed its basic obligations of loyalty to a client, that it had committed fraud in using a related company to handle the Adidas deal, and that it had broken European competition law in failing to keep Brussels up to date on the whole transaction.

In 2005, the Paris Appeals Court decided that Bernard was right. They awarded him 404 million euros, the original profit made by the bank, plus interest, plus 45 million for the “moral suffering” undergone by poor old Bernard.

Ten years later, that decision was overturned and Bernard was told to pay back the money.

Christine Lagarde, the boss of the International Monetary Fund, was among those condemned for her part, as then Finance Minister, in failing to challenge the original decision to give Bernard the money.

A situation of machiavellian complexity

So, today the judges embark on the effort to decide if Bernard and five other accused consciously manipulated the arbitration process.

The judges have already described the situation as “machiavellian”. Not to say "berlusconian".

The basic question is, did Bernard and the boys use their considerable political and media clout to force a decision in their favour?

The judge in this latest case is Christine Mée, she who recently slapped a four billion euro fine on the Swiss bank USB for encouraging French clients to become tax cheats.

So she's seen swaggering heavyweights before and is unlikely to be impressed by Big Bad Ben and the boys.