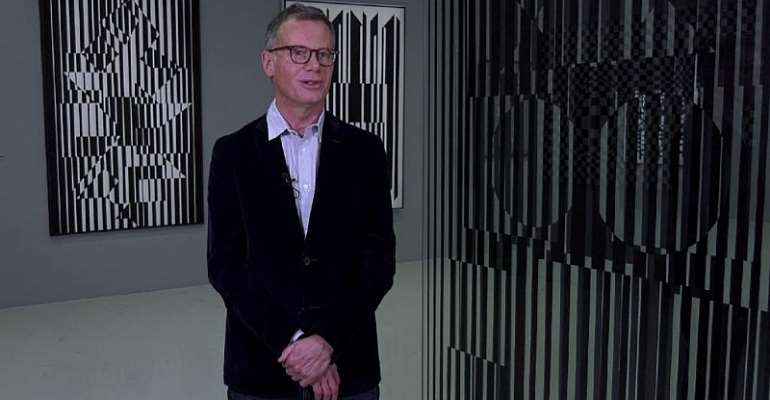 At the George Pompidou Modern Art Centre in Paris, its first-ever retrospective of the works of Franco-Hungarian artist Victor Vasarely (1906-1997) will brighten anyone's day. Organised with the Städel Museum of Frankfurt and running till May 2019, this show is long overdue.

Around three million people visit the 42-year old Pompidou Centre in an average year. Some of them will notice the suspended large shape made of black slats in the atrium. The head of former French president Georges Pompidou (1962-1968) is the first defining exhibit in the permanent collection they encounter.

The head suggested by the black strips is the work of Op Art (Optical Art), Pop Art ancient, Victor Vasarely , born in Hungary, naturalised in France, child of Bauhaus and the constructivist, or 'purposeful' art movements which were strong in Eastern Europe and Russia in the early 20th Century.

So it's quite amazing that the current major exhibition of his work, "La Partage des Formes" (dividing or sharing shapes) is the first to show so much.

The exhibition also contains the work that later led to him being dubbed as the father or sometimes grandfather of Op Art; his 1937 black and white or white and black zebras.

Art for more than art's sake

Vasarely's body of work is vast, including pieces of fine art or design and particulary architecture. Much of it was meant to be applied and then reproduced, big or small, on canvas, as posters, book covers, crockery or as the diamond-shaped logo of the Renault Car.

"Vasarely is one of the most consistent constructivist artists. He trained in Budapest Műhely, Sandor Bortnyik's 'Little Bauhaus' and all his life adhered to constructivist tradition. Even in the post-modern society of the 1970s, right up to the 1980s," explains Michel Gauthier, one of the centre's curators and co-curator of the exhibition with contemporary art professor Arnaud Pierre.

Here is an artist who was among the groundbreaking thinkers of his time, who was part of a movement which itself was part of massive change in the first half of the 20th Century.

According to Gauthier, "His two main projects were, democratisation of art through producing multiples or series, and optical revolution. During World War II, he stopped working and spent his time reading scientific literature. We may interpret his optical work as optical illusion. However, he learned from the scientific discoveries of the time that inner particles of matter are in perpetual motion, like the stars and the galaxies. So he has a transformist conception of the nature of the world."

For further visiting, the Fondation Vasarely on the outskirts of Aix-en-Provence is, as Gauthier describes it, "a Sixtine Chapel of Op Art, housed in a building designed by the artist himself with architects, and opened in 1976, a year before the Pompidou Centre in Paris."