Is The Presidency Now A Sanctuary Of Criminal Activities And Impunity? 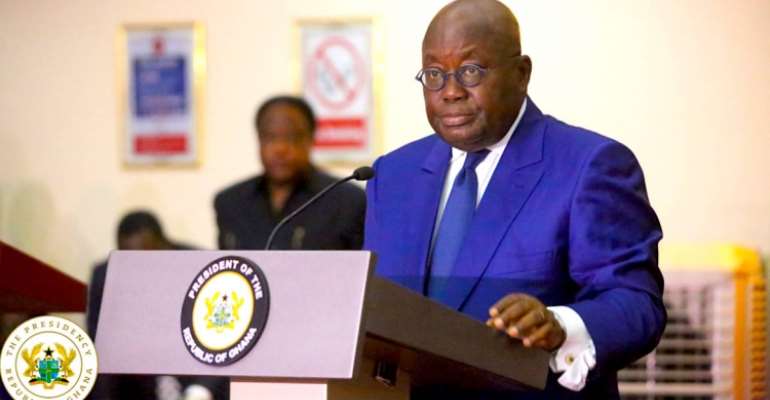 "Is the presidency of Nana Addo Dankwa Akufo-Addo a haven of scandals, incompetence, corruption, malfeasance, naked lies and above all impunity?" That is the question Mr. Nuzugu Lasim posed to me at work place as activities broke and we sat down for lunch

His request comes on the heels of yet another scandal, to wit, a revelation of celebrated journalist, Manasseh Azure Awuni, of NPP party militias training group at Government Seat Annex at Osu Castle

Now, Awuni's undercover work on De-Eye group echoes by-product of mainstream incompetence and conspicuously poor governing style of NPP Government led by Nana Addo. That the activities of the De-Eye group NPP militias are being carried out at venue that can be directly linked to the President speaks volume of unprofessionalism and outright impunity it entails

The President, himself has announced at the state of the nation address his commitment towards disbandment of associated thugs from political landscape. Mr. Awuni's piece casts doubt on the President real intentions

Nevertheless, that Mr. Awuni has been bemoaned by a cross section of Ghanaian society and political groupings at large, of disjunctively bias journalistic investigative work. His, unlike Anas's entrapment to ensnare, is based largely on facts finding

Coincidentally, Awuni's exposé comes at the very moment that Mr. Samuel Ofosu Ampofo, the NDC chairman is being charged by the CID Department of Ghana Police Service to have alleged to be planning mayhem ahead 2020 general elections using vigilante groups

The question majority of well-meaning Ghanaians are asking is whether the top officials of the presidency, including the president himself will be charged? Now that crime commission, opportunity to commit crime and illegal association has been established?

According to Mr. Awuni, Ministry of Internal Affairs is completely oblivious about the activities of De-Eye group. And had once provided security for a function heralded by the President himself. So far we haven't heard anything from Ghana Police Service ad hoc De-Eye NPP party militia grouping. The Ghana Police Service is completely helpless and/or directly complicit in the political thuggery scheme. There is no other conclusion that couldn't be that far-fetched

Now, this is mind boggling. The question as to who defend our institutions and those that believe in rule of law to actually nudge the occupants thereof to do what is right by applying the basic - if necessary stiff principles - to ensure sacred functioning of the institutions comes to mind. Is it Rawlings, Kufour, Mahama or council of state, is it Anas or even Manasseh, APlus or us? What about the experts, l mean the Ghanaian professors, the technocrats, the engineers etc.? Are our academics self-seeking individuals who care very little about the welfare of Ghana?

I have always expressed my concern about the appointment of Inspector General of Police Service (IGP). That to guarantee the independence of police service who are mandated by the constitution to enforce the law, the position of the IG should be based on merit depending years of experience and professionalism in the service. That is how is supposed to be done

We do not need constitutional experts on this matter. A mere fact that the president as civilian cannot meddle in the affairs of how personnel of armed groupings rise through their ranks is telling. Please note that the constitution sometimes contradicts itself! That is why occasionally the talk of reforms and amendment rises to the fore. The conceptualised 'commander in chief' of the armed forces must be clearly defined

Undoubtedly, the zeal or urge of electoral stakeholders, be them NPP, NDC et al, to forms violent vigilante groupings or illegal partisan militias has one thing as objective. To usurp electoral mandate by hook or cook without the consideration of the brunt of consequence on national security. Those are individuals who have allowed their parochial interests as overriding goal a feat that must be accomplished

Ghana's democracy has attained a standard that holding free and fair elections, any political party can win handily and squarely. So, the violent vigilante groups whose illegal activities likely to spell doom for the nation decidedly peaceful is just African leadership mediocre mentality of not doing things right

Obviously, Mr. Nuzugu, a co-worker here in diaspora, a native of Rwanda, a small but might country leading the pace in institutional and socio- economic transformation on the continent is fed up and abhored the unremitting cases of scandals, corruption, sheer incompetence, malfeasance and vicious lies

Mr. Nuzugu will like to know what exactly has Dr. Kusi Boafo, the man in charge of institutional and public sector reforms, learnt from his home country