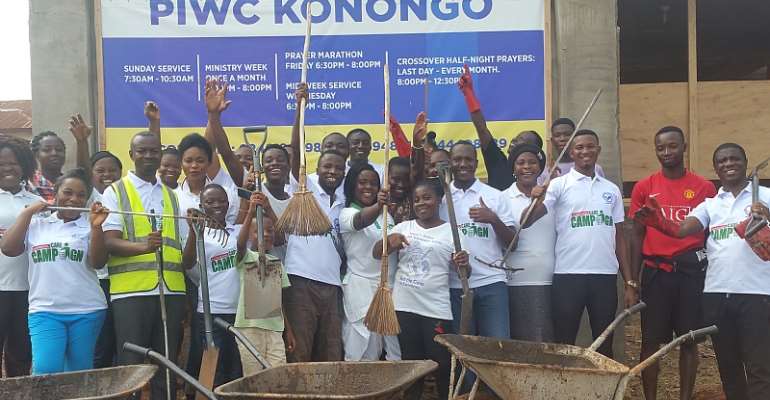 As part of the Environmental Care Campaign of the Church of Pentecost, the Pentecost International Worship Centre (PIWC) of the Konongo Area has embarked on a massive cleanup exercise. This exercise took place in the dual capital towns of the Asante-Akim Central Municipal, Konongo and Odumasi on Saturday, March 9, 2019.

The exercise was led by the resident pastor of the Centre, Pastor Isaac Ayiku Quarshie and coordinated by the Youth Leader, Deacon Isaac Obeng Yankey. Other officers of the Church were present as well as the members who also graced the exercise with much zeal to seeing a clean Konongo-Odumasi township.

Speaking to the members present, Ps. Ayiku Quarshie charged them to pursue cleanliness same way they pursue godliness. He also noted with much concern how our communities have suddenly become a place for dumping all kinds of refuse without any heedfulness and protection for the environment. His worry was kindled on how citizens are helping spread diseases that could have otherwise been prevented by ensuring a clean environment. He thus entreated the members to live an exemplary life by caring for the environment so that others would also learn to keep the community clean.

He ended by announcing that, the exercise, having yielded positive results as he envisioned would necessarily be continued to ensure that the overall vision of transforming the nation becomes a reality.

On his turn, the Youth Leader of the Centre, Dcn. Isaac Obeng Yankey applauded the Executive Council of the Church, Chaired by Apostle Eric Nyamekye for such a great vision, one that instils the 'burden' of patriotic nationalism into the hearts of the youth. He noted, "caring for our environment is as godly as any spiritual exercise and must therefore be seen as an important part of the Christian life, especially as youth of the Church and Children of God". He also took some time to advice the youth to ''desist from any engagements of political party militia or vigilantism but to continue in steadfastness and intercession for the continued stability and peace of Ghana".

We're ready to go to jail for fighting the bogus, discrimina...
27 minutes ago